Administration Dhunat Thana was formed in 1962 and it was turned into an upazila in 1983. 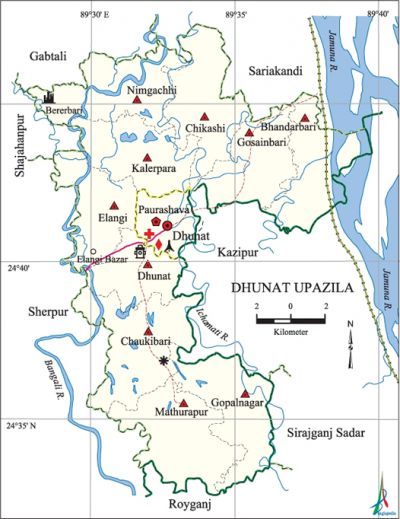 History of the War of Liberation The Pak army attacked the Dhunat Police Station on 19 April 1971 in which a police sepoy was shot dead. The Pak army killed 33 innocent persons at Elangi Bandar on 26 April; besides, heavy damages were done to the properties of the Bandar. On 27 April, the Pak army attacked the Police Station again and killed 5 sepoys. They killed three persons of Kalerpara union on 4 May 1971. A direct encounter between the freedom fighters and the Pak army was held on 6 December in which 3 Pak soldiers and 2 rajakars were killed. On 7 September, the Pak army killed 17 innocent persons and buried them in a mass grave near the Police Station. Dhunat upazila was liberated on 11 December.