Groundnut a shell like pod from a leguminous bushy or creeping small annual, Arachis hypogea, with the peculiar habit of ripening its fruit underground. It is the second largest source of vegetable oil after soybean. It is a native of South America but is now grown extensively in the Indian subcontinent, central Africa, China, Japan, Indonesia, Malaysia, Madagascar and some other tropical and subtropical countries. 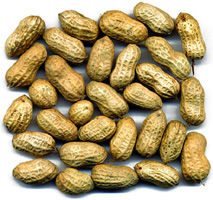 Each pod has 1-4 seeds. Removing the shell, the seeds are collected. The seeds are rich in non-drying oil (35-50%), proteins (25-30%) and vitamin B and E. The oil is used for cooking, and as margarine and vegetable ghee, and in confectioneries and pharmaceutical industries. Inferior quality oil is used for soap and as lubricant. Groundnuts are also eaten after roasting.

In Bangladesh it is cultivated in about 73,000 acres. About 38,000 m tons of groundnuts are produced annually in the districts of the Gangetic delta. Noakhali, Faridpur, Kishoreganj, Patuakhali, and Rangpur districts, however, produce most groundnuts either as a rabi or a kharif crop. [Mostafa Kamal Pasha]