Krishna (Krsna) the eighth incarnation of vishnu. The Hindus regarded Krishna as a 'God by Himself', a fuller incarnation of Vishnu. In the gita, Krishna tells Arjun that he is Vishnu and that he appears on earth at different times to destroy the forces of anti-religion and evil and protect religion and those who are virtuous. He is sometimes reincarnated as a human being and sometimes as an animal as well. The oldest reference to Krishna is in Vedic literature. The Rg Veda, which mentions Krishna more than once, depicts him as a non-Aryan warrior opposed to Indra. At places he is also shown as a sage or a demon. 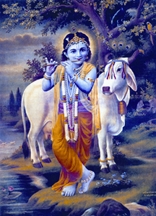 Krishna has been described as the son of Devaki in Chhandogyopanisad and Kausitakibrahmana. His guru was Ghora-Angirasa. Krishna, as described in the mahabharata, different puranas, Shrimadbhagavata and Vaishnava lyrics, appeared during the Dvapara Yuga, or the third age of the world. According to legend, Krishna was born on the eighth day of the lunar month in Bhadra in his maternal uncle Kangsa's house, where his parents had been imprisoned. The day of his birth is celebrated as janmastami.

Krishna has been described by some as a non-Aryan deity who was worshipped by the early communities and later became associated with the religion of the Brahmins. The Vaishvava faith developed around him. There are also differences of opinion as to whether Krishna was a historic figure. Some say he was an imaginary character who never existed except in the imagination. According to some others, however, Krishna was a historic person, of high moral character and a religious reformer. In course of time, he was deified. But there is no historical evidence about his life. Sri Krishna is a multifaceted character with different stories woven around him. One of the stories of his early childhood describes how he saved the children of Gokul from death. Kamsa, his maternal uncle, had become king of Mathura after deposing his father and imprisoning him.

A fortuneteller had told Kamsa that a child named Krishna would kill him. To prevent this, Kamsa imprisoned his sister, Devaki, and her husband, Vasudeva, and killed his sister's sons. Shortly after Krishna was born, his father sent him to Gokul. Kamsa learned about this and used Putana, a female demon, to kill the children of Gokul. Putana started to kill the children by nursing them at her breasts to which she had applied poison. She started to feed Krishna, but was herself destroyed.

When Krishna was a little older, he killed Kamsa and freed his grandfather and his parents. Thus he restored peace in Mathura. In due course Krishna killed the evil forces of Vatsasur, Aghasur and Vakasur. He also destroyed the poisonous snakes at Kaliyadaha, ate up the forest fire to save Vrindavan and held the mountain of Govardhan in his hand to save the community of milkmen from the rage of Indra.

Harivangshapurana and Srimadbhagavata etc depict him at Vrindavan, as the lover of radha and the sweetheart of the gopis (milkmaids). Krishna's love for Radha, the daughter of a milkman and the wife of another milkman, was later to be the main inspiration of vaisnava literature. His affairs with the gopis contain the essence of Indian Vedanta philosophy of love and eternity. According to this philosophy, the jivatma (literally, living or mortal souls), separate human souls, and the paramatma or eternal soul are one and the same. This is why human souls constantly desire to unite with the eternal soul. Krishna is the eternal soul and the gopis symbolise the human soul. Krishna is also depicted as a friend. Apart from Shridam, Sudama and Uddhav, Arjun was his friend and also a relation. In his relationship with his friends, the human side of Krishna is revealed.

The mahabharata gives an account of Krishna's qualities as a statesman and philosopher. He has been depicted as a king (king of Dvaraka), politician, diplomat, warrior and philosopher. He acts as an emissary for the Pandavas and recommends the return of their kingdom. He also advises the Pandavas in the war at Kuruksetra and helps them to win it. He destroys the evil forces of Duryodhan and puts Yudhisthira on the throne. In this way he wins victory for the forces of goodness. At Kuruksetra Krishna himself does not use a weapon but aids the Pandavas and thus influences the course of the war. One of the most famous parts of the Mahabharata is Shrimadbhagavadagita or in short Gita where Krishna instructs Arjun about the duties and obligations of a ksatriya and about the soul. In this way Krishna helps to destroy evil and nurture virtue. Some time later evil appears in Krishna's own Yadu dynasty. He destroys the dynasty. Krishna then plans his own death, succumbing to an arrow shot by an animal catcher.

Krishna's story has had a deep impact on Hindu society and culture as well as on sanskrit literature and medieval bangla literature. jaydev's Gitagovindam, baru chandidas's srikrishnakirtan and a large segment of the Vaishnava literature of the Middle Ages were based on Krishna and his deeds. Padavali kirtan, pala gan, Vichchhedi Gan and other folk songs were composed on the story of Radha and Krishna. These were very popular in Bengali society in the past, and even today they can entertain audiences. [Dulal Bhowmik]