Lalon Shah (1774-1890) preceptor of baul asceticism, composer and singer of Baul songs. He was born on 1 Kartik 1181 BS (1774 AD) at village Harishpur in Jhenaidah district, variantly in a Kayastha family of village Bhadra in Kumarkhali of kushtia district. 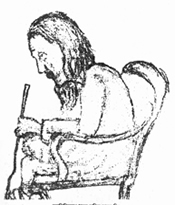 Little is known about the personal life of Lalon Shah. He was probably married in his boyhood. Sometime in early years of his life, Lalon happened to be a victim of small pox while in a journey to visit the places of pilgrimage. His companions abandoned him on the way. A Muslim fakir (saint), Siraj Sanyi rescued him in a dying condition and got him recovered by nursing and medical treatment. After his recovery Lalon returned to his house, but was denounced by his wife and the relatives since he had been under the shelter and association of the Muslims. Disappointed and disheartened, Lalon returned to Siraj Sanyi, initiated with him in Baul doctrine and devoted himself in austere ascetic practice. After the death of his Guru, Lalon established his akhda (monastery) at Chheunriya on the bank of the Kaliganga, and passed his days there in austerity, composing and singing devotional songs.

Lalon had no institutional education. By his devotion he acquired deep knowledge on the religious doctrines of the Hindus and Muslims, the manifestation of which is found in the songs composed by him. He composed nearly two thousand five hundred devotional songs. His songs are rich in mystic trend of thought and in artistic skill. Composed in simple language his songs are significant and impressive, and are indicative of ideal of human life, humanism and non-sectarian attitude. His disciples used to sing his songs. Even in his life time, a colossal Baul community developed consisting of his disciples and of their disciples. His disciples like Kangal Harinath Majumder, Dudu Shah, Pagla Kanai etc earned reputation as composer of Baul songs.

Lalon Shah denounced caste distinction, and he sung: Sab lokey koi Lalon ki jat samsare /Lalon koi jater ki rup dekhlam na e najare (All the people ask as to what caste Lalon belongs to here on earth/Lalon says, I have not yet seen what is the form of a caste). It is for their non-sectarian spirit and universal urge that the songs of Lalon are simultaneously popular to the people from both the Hindu and Muslim communities. His songs like Khanchar bhitar achin pakhi, Barir kachhe Arshi Nagar, Amar Gharkhanai ke biraj kore are the invaluable treasure of Baul theosophical literature.

The main theme of the songs of Lalon Shah is the concept that 'the body is the seat of all truths', and the Baul asceticism is based on supremacy of the guru or preceptor. The main objective of Baul ascetic practice is to trace and get company of the inherent and formless Supreme Being who can only be achieved by divine love, devotion and meditation. The guru devises the way of devotional success and salvation. This metaphysics have allegorically been expressed in the songs of Lalon. Lalon had the materials of his songs from the Hindu and Buddhist religious behests, the Vaishvava Sahajiya doctrine and from Sufism. To his liberal religious concept has been added the humanitarian social thoughts. In his songs like Sab loke koi Lalon ki jat samsare, Jat gelo jat gelo bale, Sabe bale Lalon Fakir Hindu ki Javan, Emon samaj kobe-go srijan hobe. Lalon Shah has indicated a guideline for the emergence of a religious, racial and caste discrimination free society.

Lalon's songs are unique not only in religious and social value, but also unique in literary and musical qualities. In highlighting the doctrine that 'the body is the seat of all truths' though he occasionally used metaphor and allegory in his songs, his language is spontaneous and easily intelligible. For his extraordinary poetical talent and lucid style of expression, his songs emerged artistic with poetical fevour. Though structured within the purview of Bhatiyali and Kirtan music, Lalon's songs represent a distinctive tune which have asserted their standing position in the trend of Bangla folk-song as 'Baul music'.

Lalon's songs were at a time so popular that they were extensively practised by the common people including the boatmen in the river. Even today these songs are getting popularity in all quarters and have been included in the regular programme of the radio and television. No manuscript of songs of Lalon has hitherto been discovered. Perhaps some of his disciples collected and compiled them at a later date. rabindranath tagore collected a manuscript of Lalon's songs from Lalon's akhda at Chheunriya and had 298 songs copied therefrom. He selected 20 songs out of them and got them published in four consecutive issues of the Prabasi. In his written speech on Chhanda (prosody) in Calcutta University in 1341 BS Rabindranath Tagore highlighted the prosody of three songs of Lalon. Besides, in his Hibbert Lecture A Religion of Man (1930), in his lecture on An Indian Religion delivered in France, and in the preface of the book Haramoni of Mansuruddin (Poush 1334), Rabindranath gave on explanation on Religion and Philosophy with quotation from the songs of Lalon. Thus Rabindranath for the first time attracted the attention of the educated class of the country and of the world people to the songs of Lalon Shah.

Lalon Shah died on 1 Kartik 1297 (17 October 1890) at Chheunriya at the age of 116. He was laid to rest at Chheunriya. Every year on the occasion of dolyatra (March-April) and on the death anniversary of Lalon Shah, his disciples and devotees assemble at his mazar premises, and pay homage to the departed guru through entertainment of the saints and presentation of songs for three days. [Wakil Ahmed and Anwarul Karim]