Museum has been defined by the 10th General Assembly of ICOM (1974) as 'a non-profit making, permanent institution in the service of society and of its development, and open to the public, which acquires, conserves, researches, communicates, and exhibits, for purposes of study, education and enjoyment, material evidence of man and his environment'.

The British brought the concept of museum to Bengal. The year 1796 was the starting point of the history of museums, not only in Bengal but also in the Indian subcontinent. The initiative came from the members of the asiatic society of Kolkata, who collected many archaeological, ethnographical, geological and zoological specimens and felt the need to house the materials suitably. In 1796 donations were invited to erect a building. warren hastings, the patron of the Society, provided a plot of land at Park Street, Calcutta, and the building was completed in 1808, and the first Museum in the subcontinent, the Asiatick Society Museum, was founded in 1814 with nathaniel wallich, a Danish Botanist, as its Curator. This museum continued to grow with a strong bias for natural history and ethnography; archaeology enjoying a low priority.

Founded in 1818, the Carey Museum at Serampore in West Bengal was the first college museum in the subcontinent. Charles Stuart's Museum in Calcutta was the first museum under private initiative. The Great Exhibition of 1851 in London provided an incentive to the British officers in the subcontinent to participate in museum activity. The School of Industrial Art was founded in Calcutta in 1854 as an outcome of the impetus provided by the Great Exhibition.

While Sir william jones initiated the museum culture in Bengal, to james prinsep belongs the credit of having first conceived the idea of a National Museum in the subcontinent. The imperialist British government was, however, really not interested in museum development in India. They were interested in enriching the Company's Museum in London, established in 1801, with specimens carried away from the Indian Empire. Whatever support they provided here for museum development was aimed at acquisition of knowledge about the country's wealth and hence the British officers had a strong bias for geology, zoology, industrial arts, agricultural products, forestry and mineralogy. They made no efforts to protect the cultural property of the subcontinent in the subcontinent. Charles Stuart's collection was shipped from Calcutta to London and it was auctioned at Christies in June 1830.

The change of power from the east india company to the British Crown in 1858 proved exceedingly helpful to the growth of museums. The birth of the archaeological survey of india in 1861 ushered in a new era in this field. In 1866 the British government turned the Asiatick Society Museum into the Imperial Museum by an Act of Parliament (No XVII of 1866) and soon it was named the indian museum and it moved to its present building in 1875. The task of reorganising it as a multipurpose museum was entrusted to Dr John Anderson, who was assisted by James Wood-Mason. The Treasure-Trove Act, enacted on 13 February 1878 during the viceroyalty of Lord Lytton, enabled the government to acquire hoards of coins, inscriptions, sculptures and terracotta remains, which in turn found their way into the museums.

The arrival of Lord curzon in 1899 served as an impetus for the growth of museums, both under imperial support and the patronage of local bodies and institutions as well as local elite. After thepartition of bengal (1905), Dhaka came to the limelight. As the Shillong Cabinet of Coins was going to be transferred to the new capital HE Stapleton, the Honorary Numismatist to the Government, proposed to set up a museum at Dhaka, which was ultimately established in 1913.

The enactment of the Ancient Monuments Preservation Act of 1904 gave the necessary impetus for the growth of local museums in sites of archaeological interest. Malda in West Bengal witnessed the first museum of this nature. Malda, after the partition of 1905, formed a part of the new province of East Bengal and Assam, and the Museum there developed as a repository of Pala-Sena sculptural art as well as the remains of the cities of gaur and pandua.

Victoria Memorial Hall, which was destined to be an important museum, owes its beginning to Lord Curzon. On the demise of Queen Victoria in January 1901, Curzon ordered the construction of the magnificent marble edifice as a memorial to her glorious reign, which would serve as a historical museum, a national gallery 'for the commemoration of that which is honourable and glorious in the past'.

The Bengal Academy of Literature, founded in Calcutta in 1893, which took the name of vangiya sahitya parisat from 1894, set up Vangiya Sahitya Parisat Chitrashala in its own building in Calcutta in 1906. The Parisat established as many as 30 branches in different parts of Bengal and its Rangpur and Dhaka branches set up Sangrahashalas in 1921, and the Shrihatta branch set up its Sangrahashala later. Vidyasagar Smrti Sangrahashala of Vangiya Sahitya Parisat was also established round about the same time.

Gurusaday Dutt, a Bengal civilian, thought in terms of a museum devoted exclusively to the arts and crafts of rural Bengal and set up the Bratachari Museum (now Gurusaday Museum of Bengal Folk Art) in 1940 in his ideal village Bratacharigram. In 1941 the collection was shifted to his Calcutta house at Store Street (now Gurusaday Dutt Road). The present building at Thakurpara, Joka, the south-western suburb of Calcutta in the 24 Parganas (West Bengal) was occupied by the museum in 1959. The Academy of Fine Arts, Calcutta, founded in 1933, sponsored the creation of an important museum, which contains, besides attractive exhibits of medieval paintings and textiles, biographical materials and paintings of Rabindranath Tagore.

The Calcutta University established an Anthropology Museum in 1920 and in 1937 in the Western Hall of its Senate House it set up the asutosh museum of india art to facilitate the study of Ancient Indian History and Culture. The Asutosh Museum played more or less the role of a provincial museum by exploring and surveying the different regions of Bengal, by collecting and preserving ancient relics and significant examples of folk art from different parts of Bengal.

Museums in Bangladesh' There are several museums in the country, which are depositories of the country's rich cultural heritage. The varendra research museum at Rajshahi, established in April 1910 under the patronage of Kumar saratkumar ray of the Dighapatiya Raj family, was the first museum in the country. Narendra Narayan Ray Chaudhury of Baldha established the baldah museum at Dhaka in 1925 along with a Botanical Garden. Situated at Wari overlooking the Christian Cemetery in Dhaka, it started as a home museum and it grew into a repository of varied items. In between the creation of these two museums the Dhaka (Dacca) Museum was founded in 1913. 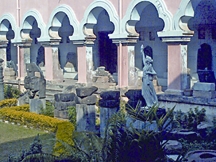 Initially housed in a single room in the old Secretariat (now Dhaka Medical College Hospital) it was formally inaugurated by Lord Carmichael on 7 August 1913 and HE Stapleton, officiating Director of Public Instruction of Bengal was its first Honourary Secretary. nalini kanta bhattasali joined the museum as its Curator on 1 July 1914. Years before the Dhaka University came into being, Bhattasali's efforts made it a centre of historical research. It moved to the Baraduari of the nimtali palace (now inside the Anwar Pasha Bhavan of Dhaka University) and continued its existence there till it was moved to a site at Shahbagh and turned into the bangladesh national museum. The names of Satyendranath Bhadra, Sayid Aulad Hasan, BK Das, Khwaja Muhammad Yusuf, hakim habibur rahman, syed muhammad taifoor and Abul Hasnat should always be remembered in connection with the establishment and nourishment of the Dhaka Museum.

Rammala Museum of Comilla, established in 1935, owes its origin to Mahesh Bhattacharya, a homeopath and philanthropist who set it up in memory of his mother Rammala. Now a mere shadow of its former self, the museum was indicative of the abiding interest of Mahesh Bhattacharya in the archaeological potentialities of the Mainamati-Lalmai area, which were then yet to be unveiled. 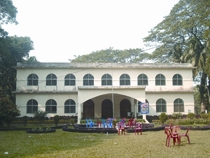 In 1905 vangiya sahitya parishad decided to set up its branches outside Calcutta and its first branch at Rangpur set up a Sangrahashala (museum) and following its example Dhaka Sahitya Parisat (founded in 1921) founded Dhaka Sahitya Parisad Sangrahashala chiefly with the collections of Birendranath Basu and NK Bhattasali. Shrihatta (Sylhet) Sahityn Parisat Sangrahashala was added to the list of museums in Bangladesh before 1947.

From this humble beginning in the colonial period, Bangladesh witnessed considerable growth in museums in the period between 1947-1971, though the three Shahitya Parisat Museums at Rangpur, Dhaka and Sylhet became defunct. The first archaeological site museum was built in a single-room at paharpur in present Naogaon district in 1957. Now a new modern building has replaced the old one and the antiquities have been arranged there systematically. In order to preserve the antiquities recovered from archaeological excavations and explorations site museums were added at mainamati (1966) of Comilla, mahasthan (1967) of Bogra and at lalbagh fort (ready in 1971 but formally inaugurated in 1974) of Dhaka city.

Poet Rabindranath Tagore's house called Kuthibari at Shilaidaha in Kushtia district was declared to be a protected monument in 1957 and later developed into a Personalia Museum. With a view to collecting, exhibiting and studying materials pertaining to the tribal folks, an ethnological museum was established in Chittagong in 1967; though it was formally opened in 1974.

Realising the added importance of the Dhaka Museum, a scheme for the development of the museum was drawn up in 1951 and steps were taken to amalgamate Baldha Museum with Dhaka Museum, which was housed then in the Baraduari of the Nimtali Palace. The Baldha collection was formally taken over by the Dhaka Museum in 1963 and the Dinajpur collections were added to it in 1961.

With the emergence of Bangladesh, museum development got a big momentum and by now there are more than 80 museums in Bangladesh. Notable among the new museums are the Bangladesh Folk Art Museum at Songargaon, Memorial Museum at Shahjadpur Kacharibari, Ahsan Manjil Museum, Zainul Abedin Sangrahashala at Mymensingh, Museums at Upajatiya Cultural Academy at Birisiri and Tribal Cultural Institute, Rangamati; Liberation War Museum at Mainamati, Comilla, Zia Smriti Museum of Chittagong, Osmany Memorial Museum at Sylhet. Recently Dhaka Nagar Jadughar (City Museum); Bangabandhu Sheikh Mujibur Rahman Smriti Jadughar and the Muktiyuddha Jadughar (Liberation War Museum) have been established in Dhaka. On the southern side of the Bijoy Sarani Armed Forces Museum has recently been situated.

Mention may also be made of special personalia museums like the Lalan Museum, at Chheuria (Kushtia) and Hasan Raja Museum at Sunamganj focusing on the life and activities of two great mystic poets of Bangladesh.