Myna (shalik) medium-sized birds with short tails of the family sturnidae, order passeriformes. Bill typically straight and rather long and slender. Legs and feet strong, wings short and rounded to long and pointed.

Sexes nearly alike. Flights steady and direct. They are gregarious birds, common about civilisation and cultivation. Some feed around cattle. Feed mainly on insects, fruits, grains and flower-nectar. Calls are loud and raucous with variety of harsh. 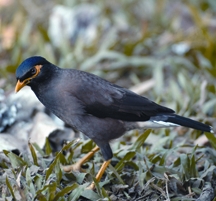 Some have pleasing whistles. Some species are renowned mimics of the calls of other birds, animals and human speech and sounds. Nests are built in holes or cavities in trees or buildings, or large globular structures of straw, twigs, etc in trees; eggs 2-9. Some species are popular cage birds.

The family has 104 species worldwide; 18 in Southeast Asia. In Bangladesh there are 12 species, of which 3 are migratory.