Administration Nandigram Thana was formed in 1932 and it was turned into an upazila in 1983. 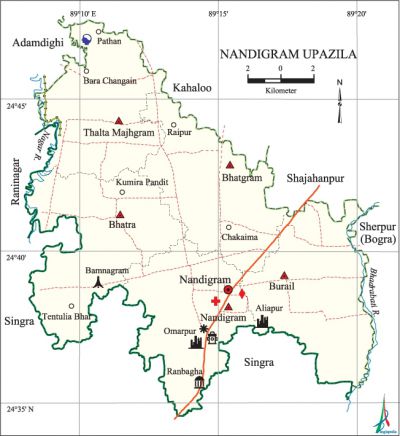 History of the War of Liberation On 28 April 1971 the Pak army conducted mass killing at village Baman of the upazila in which 157 innocent persons were killed. Besides, during the war of liberation one freedom fighter was killed in an encounter with the Pak army. Nandigram was liberated on 8 December.

Marks of the War of Liberation Mass grave 1 (Bamangram).

Hats, bazars and fairs Hats and bazars are 25, fairs 3, most noted of which are Nandigram Hat, Ranbagha Hat, Omarpur Hat, Kundar Hat and Baishakhi Mela at Kalyanpur.