Water bodies Main rivers: little jamuna, Tulsi Ganga; Dighali Beel and Gatia Beel are notable. Administration Naogaon Thana was formed in 1810 and it was turned into an upazila in 1984. 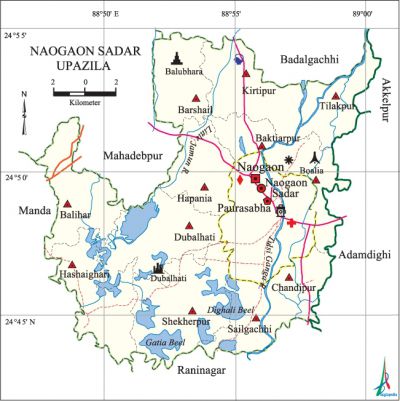 Historical events Notable historical events of Naogaon include indigo resistance movement (1859-60), a movement led by peasant leader Astan Mollah against the zamindars protesting enhancement of rent in 1883. During the war of liberation in 1971, the headquarters of Wing 7 of EPR was at Naogaon. On April 22, the Pakistan army captured 125 young boys from Sultanpur, Par Naogaon, Dhopapara, Ukil Para and Hat Naogaon killed them and threw their dead bodies into the river from the Lord Lytton Bridge. On 23 April 1971, the Pakistan army killed 17 people of village Mohanpur, and on 25 April, they raided at Fatehpur Garebari and killed 13 persons there.