Nematode unsegmented worm of the phylum Nematoda (or Aschelminthes). Nematodes are cylindrical worms, pointed at both ends, microscopic or large, free-living or parasitic, found in freshwater or saltwater or in soil. Parasitic nematodes require a plant or animal to survive. Numerous free-living soil inhabiting, and fresh water and marine nematodes have been recorded from Bangladesh. Some species infesting the roots of rice, jute and other crops have also been described. Parasitic nematodes in humans found in Bangladesh are: Ascaris lumbricoides, Necator americanus, Ancylostoma duodenale, Trichuris trichura, Enterobius vermicularis, Strongyloides sterocoralis and Wuchereria bancrofti. Except for W. bancrofti which lives in the lymphatic system and causes elephantiasis and hydrocoele, the rest are found in the intestine. A. lumbricoides is about 15 cm long, white worm most recognizable in stools. E. vermicularis is a tiny worm. Its presence in children can hardly be missed because it appears on the rectum at night and causes severe itching. N. americanus and A. duodenale have cutting plates with which they hook on to the intestinal wall and suck blood.

Almost every person in Bangladesh has experienced an infection from one or more of these intestinal worms at one time, most likely in childhood. The reasons for this are poor sanitary habits, unhygienic food handling and crowded living conditions, all of which allow the eggs of the worms to be disseminated easily. More rural than urban people are infected. W. bancrofti now occurs all over Bangladesh and is transmitted by Culex mosquitoes. Brugia malayi, another filiarial nematode occurs in the primates in Bangladesh.

Nematodes also occur in the livers of cattle and sheep. The commonly occurring nematodes include the wire worm or barber pole worm Haemonchus contortus in the abomasum, and the nodular worm Oesophagostomum sp., and the compact worm Strongyloides sp. in the intestine. Cows infected with nematodes give low yields of milk. Poultry also harbours nematodes. Nine species of nematode parasites exist in the domestic fowl of which Heterakis is the most common. Species of Capillaria, and Heterakis occur in the caecum, and the stout, large-sized Ascaridia, in the intestine. A nematode is also found in the gizzard. 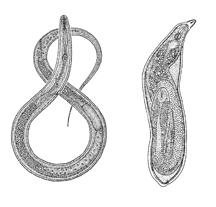 Among the amphibians, toads and frogs harbour a number of nematodes. The house lizard, Hemidactylus brooki and the wall lizard, H. flaviviridis in Bangladesh have two species of nematodes, Neopharyngodon gecko and Strongyloides cruzi in their rectum. The skink, Mabuya carinata, harbours four nematodes: Pharyngodon, Pareterakis, and Cruzia in the intestine, while S. cruzi in the rectum. In the Mirpur Zoo in Dhaka 13 out of the 17 mammalian species carried one or more species of nematodes. The nematodes were identified as Strongyloides, Strongylus, Bunostomum, and Trichuris. Cockroach, Periplanata americanus in Bangladesh is the host to five species of nematodes. Two species of nematodes were found in the earthworm. Nematodes have been reported from about 50 fish species investigated. The frequently found nematodes in fish are the species of Camallanus, Procamallanus, Spirocamallanus, Cucullanelus and Gnathostoma, occurring in the intestine. Nematode larvae have been found in marine fish from the Bay of Bengal. Adults are not easily found probably because they mature in other vertebrate hosts. Nematode eggs are also found in soil. [Joseph D'Silva]