Nightjar (ratchara) cryptically coloured birds of the family Caprimulgidae, order Strigiformes; to this order the owls also belong. The bird is characterized by its flat head, wide mouth fringed with bristles, large eyes, soft plumage and consequently noiseless flight. They tend to feed at dusk or at night by catching insects on the wing. There are 68 species of nightjars worldwide; Bangladesh has four species of which Grey Nightjar is endangered. 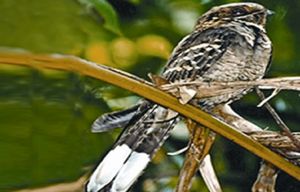