Nine-Dome Mosque is located on the western bank of the Thakurdighi, less than half a km away to the southwest of the tomb-complex of Khan Jahan. The mosque is now a protected monument of the Department of Archaeology, Bangladesh.

It is a brick-built square structure measuring about 16.76m externally and 12.19m internally. The 2.44m thick walls on the north, south and east sides are pierced with three arched-openings on each side; the central one, set within a rectangular frame, is larger than the flanking ones. 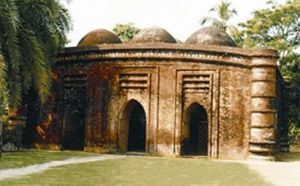 The interior of the mosque is divided into three aisles and three bays by two rows of stone pillars, two in each row, thus creating nine independent square bays, each of which is covered with an inverted cup-shaped dome. All the nine domes are internally carried on four intersecting arches springing from stone pillars and brick pilasters attached to the side walls. The phase of transition for each dome is achieved by means of traditional Bengali pendentives.

The qibla wall is internally recessed with three engrailed arched-mihrabs, which correspond to the three archways on the eastern facade. Here also the central mihrab is larger than the side ones and has an outer projection.

The stone pillars, supporting the domed roof, have stepped square pedestals and capitals. Their shafts are octagonal and are separated from the pedestals and capitals by raised bands. The engaged brick pilasters have also stepped square bases and capitals with stone imposts on the top. The corner towers emphasising the four exterior angles of the building are circular in the Khan Jahani style. All these towers, having moulded bases and plain tops, do not rise above the roof level. The cornices are gently curved.

The decoration, wrought in terracotta, is now confined to the archways, mihrabs, corner towers and cornices. On the exterior surface the rectangular frames, enclosing the archways, are enriched with net patterns. The narrow vertical sunken panels between the archways depict at their bases a pair of mouldings with lozenges. The space between the mouldings are decorated with rosettes alternating with diapers and sometimes with running scrolls containing small rosettes. Inside the building the spandrels of all the entrance arches depict large full-blown lotus flowers, while the faces of the arches at the key-point are embellished with large lozenges containing bordered rosettes. Three moulded bands ornamented with rows of small rosettes and lotus petals crown each of these archways. The narrow sunken spaces in between the bands depict necklaces, scrolls, tendrils and flowers of varying designs.

All the mihrabs are very richly decorated. The spandrels of the central mihrab arch are enriched with flower motifs. The space between the two moulded bands on top of the mihrab arch is docorated with vine scrolls containing bunches of grapes. The semi-circular mihrab niches are marked with decorated horizontal sunken panels, each being separated from the other by a raised decorated band. The motifs of ornamentation vary from panel to panel and consist of necklace designs, lotuses, palmettes and different types of interlocking patterns. Dividing the semi-circular mihrab niche a chain hangs down from the apex of the half-domed top and ends in a rectangular pendant, now bare. The rectangular frame, which encloses the mihrab arches, is filled with interlocking designs with rosettes. Above the frame are two boldly projected bands decorated with a row of rosettes. A frieze of ornamental crests crowns the whole composition.

The curvature of the cornice gives the building a pleasing appearance. The two cornice bands, running all round the building are enriched with rows of lozenges, while the sunken space in between them still depicts ornamental square panels at several places. The corner towers, divided by moulded bands, depict such decorative motifs as lozenges, lotus petals and pellets.

The mosque is stylistically dated to the time of khan jahan. Local tradition ascribes the building to one of Khan Jahan's officers who had his residence nearby on the same bank of the Thakurdighi. [MA Bari]