Administration Sherpur Municipality was formed in 1869. Sherpur Sub-division was turned into a district in 1984. Of the five upazilas of the district sherpur sadar is the largest (356.12 sq km) and nakla is the smallest (174.80 sq km). 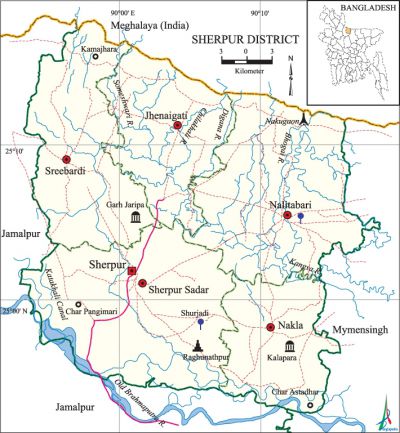 History of the War of Liberation A number of freedom fighters including Commander Nazmul Ahsan were killed in an encounter with the Pak army at Cherakhali of Nalitabari upazila. On 27 July, the Pak soldiers killed 185 people at village Sohagpur of this upazila. On 24 November the Pak army killed 52 people at village Suryadi under Sherpur sadar upazila. Besides, 20 freedom fighters were killed in encounters with the Pak army at Narayankhola, Gaurdar, Boroitar and Chandrakona of Nakla upazila.