Nimtali Deuri popularly known as Nimtali Gate, is a remainder of the Nimtali Palace complex which was built in 1765-66 for the accommodation of the Naim Nazim family of Dhaka. After the East India Company obtained the Diwani in 1765 the administration of Dhaka came under their control. They appointed Lieutenant Archibald Swinton to act as the administrator of Dhaka Niabat or the province of Dhaka which was then under a Naib-Nazim or Deputy- Governor. The Naib Nazims in Dhaka lived in the Dhaka Fort (present day Central Jail). 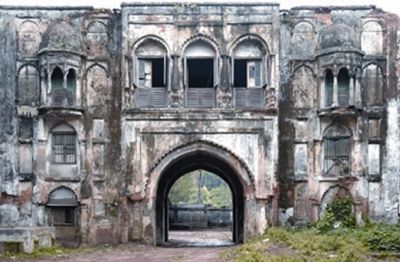 Lieutenant Archibald Swinton upon taking over the city of Dhaka decided to live and run his office from the Dhaka Fort. This necessitated to find an alternative accommodation for the Naib-Nazims. As a matter of fact the office and houseshold of the Naib-Nazim were temporarily accommodated in the Bara Katra building of Dhaka. However, the Company resolved that as they had taken over the Fort, a suitable residence-cum- office for the Naib-Nazim of Dhaka should be built. It may be pointed out here that the Company had cordial relationship with the then Naib-Nazim Jaserat Khan. Accordingly Lt. Swinton was asked to build a suitable palace for the Naib-Nazim. Swinton chose the Nimtali area in the north of the city as the site for the new palace. It is not exactly known how the building was planned and designed but it can be safely assumed that Swinton had played an important role in this project. Hence this building, first of its kind constructed during the time of the East India Company, had both Mughal and British elements in its planning and execution. That is why it is generally said that architecturally it represents an Indo-British secular character. Nimtali Palace including the Nimtali Deuri survived well during the time of the Naib-Nazims. But with the abolition of the post in 1843, it started decaying. At one point the Company put up various buildings to auction, and the purchasers demolished them for the value of their bricks. Fortunately the Nimtali Deuri or the western gate of the palace complex escaped this vandalism and thus survived. However the time has taken toll of the edifice but there is no direct evidence that it suffered from the earthquake of 1897. Nevertheless for various reasons parts of the building suffered damages which were later repaired without any concern of its architectural considerations. Most of the palace complex has however disappeared excepting the Deuri or the outer gate. It was built as an entry gate to the Nimtali palace or palace from the west. 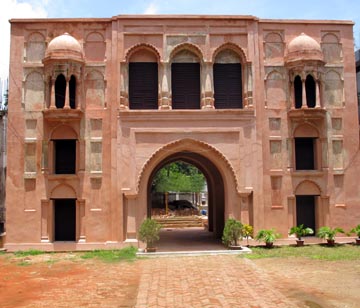 The lost Nimtali Palace occupied a considerable area on the northern side of the city between the modern Nimtali Mahalla and the High Court building and consisted of a number of separate structures and an amalgam of buildings. The site was just on the periphery of the city, mostly surrounded by woodlands. It is not possible to give a correct or detailed description of these structures as no contemporary account or plan of the site has survived. It may, however, be assumed, judging from the extant gateway, the Nimtali Deuri, that it was built after the usual Mughal palace designs with several gateways, inner court, private residence, place of prayer, tanks or water reservoirs, barracks for soldiers and quarters of staff, gardens and the like. As long as the palace remained the residence of the Naib-Nazim it played a significant role in the socio cultural life of Dhaka.

Reverend Bishop Heber, who visited Dhaka in 1824, left a graphic description of the palace complex, which he found in a state of ruins. He mentions a “really handsome gateway, present Nimtali Deuri, with an open gallery, where the ‘Nobut’or evening martial music, is performed, a mark of sovereign dignity, to which the Nawab never had a just claim, but in which Government continued to indulge him...” He further mentions, “a very handsome hall, an octagon supported by gothic arches, with a verandah round it, and with high gothic windows...” In addition to what has been mentioned by Heber there was one chamber with twelve doors known as ‘Baraduari’. It is said that the chamber was earmarked for the audience of the twelve Sardars (leaders) of the mahallas of the city, who at the time of the audience used to enter the hall individually through the twelve doors. 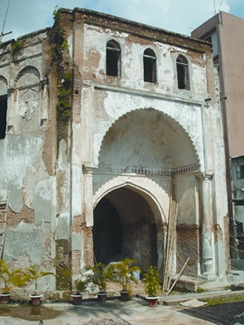 The Nimtali Deuri, the western gateway now lying within the compound of the Asiatic Society of Bangladesh, now stands as the lone witness to testify the existence of the Nimtali Palace.

Architecturally, the Deuri is a two-storied building pierced by a massive archway leading to the Palace complex from the west. It consists of half a dozen rooms of different sizes and dimensions along with a large hall room on the first floor. It is embellished with oriel windows, flat roof rested on wooden rafters and beams, louver shutters (Venetian blind), brick-dust-time plaster etc.

Formerly, many interventions had been made into the inner structures of the building by its users including the University of Dhaka, Dhaka Museum and finally the Asiatic Society from 1952 to 1982. Repairs and structural changes were made mostly according to their own whims and needs. Structurally, such interventions had changed significantly the original architectural features of the building. Judging from the present state it appears that the building was the first example where the Mughal features and designs were incorporated with the European style of construction. Undoubtedly this had made the building historically very significant. As its custodian, the Asiatic Society of Bangladesh has carried out in 2010-11 necessary conservation works to restore the building to its original architectural form. [Sharif uddin Ahmed]