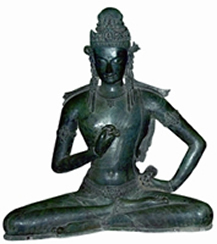 The Buddha did t include the divine in his teachings. buddhism is thus generally called an atheistic religion. The mahayana cult, however, introduced the divine in the form of Adi Buddha. According to this cult, Adi Buddha is the cause of creation, thunder, and of the void. He is described as omnipresent, omnipotent, and omniscient. The idea of Adi Buddha is believed to have originated in Bengal, from where it spread to other parts of India, Nepal and Tibet.

The cult of Adi Buddha was at first accepted by the Kalachakrayana group of the vajrayana sect belonging to the Mahayana branch of Buddhism. The principal temple situated on the Swayambhu Mountain near Kathmandu has been consecrated to Adi Buddha. According to a legend narrated in Swayambhupurana, Adi Buddha was first manifested in the shape of a flame. Buddhist creation myths describe how Adi Buddha created the Avalokiteshvar, Maheshvar, Brahma, Narayan, Saraswati, the moon, the sun, the wind, the earth, and the ocean.

Adi Buddha is considered to be the incarnate symbol of the void and the possessor of five kinds of virtue from which five kinds of meditation originated. From these meditations the five medidating Buddhas appeared. When Adi Buddha is represented in human form, he is called Vajradhar. Representations of Adi Buddha Vajradhar show him in a seated position, with his legs crossed in a meditative vajrasan or in the sitting posture kwn as vajraparyanka.

With his bodhisattva crown, fine dress and jewels, the deity looks like an Indian prince. His two hands are folded across his chest. He holds a lightning bolt in his right hand and a bell in the left.

Vajradhar has also been represented as a pair, especially when he is paired with power. This power of Vajradhar is named 'prajnaparamita'. These single and paired images have been variously explained. For example, the single image symbolizes the void, while the paired image symbolizes enlightened intellect; one is the living soul, the other is the eternal soul, etc. [Bhikhhu Sunithananda]