Agroecosystem an assembly of mutually interacting organisms and their environment in which materials related to crop production are interchanged in a largely cyclical manner. An ecosystem has physical, chemical, and biological components along with energy sources and pathways of energy and materials interchange. The interactions between these three components exert considerable influence on a particular ecosystem. In agroecosystem, besides the natural components, some plants are introduced to get benefit for humans and their livestock. 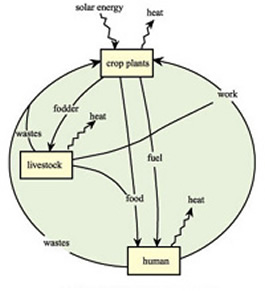 An agricultural system functions with all its inputs and outputs. Inputs include all materials such as fertiliser, irrigation, pesticides etc for proper functioning of the economic production system and outputs are the gains from the system in any form such as grains, leaves, stems, roots etc. For the sustainability of the production system, agroecosystem research considers all aspects of biology of an agricultural system. This broader approach to agricultural systems becomes more useful as production methods, developed through experimental methods, begin to approach the limits of the biological processes. As these limits are approached, it becomes more important to know how biological processes determine yield and to learn how these processes act in determining the biological limits to yields. Cycling of the nutrients through biogeochemical processes must also be considered in order to determine whether these cycles are able to sustain the high yields of intensive agricultural production that is based on the use of chemicals.

Agroecosystem research uses the methods of ecosystem analysis to measure the material and energy entering plant and animal populations and to explain how these inputs affect the physiological processes determining growth and maintenance. A biologically complete agroecosystem, presented in the diagram shows three basic components and a pattern of energy flow that is nearly the same in all agroecosystems. Green plants harvest the solar energy and store within their bodies in the form of organic compounds. The accumulated organic carbon of the compounds can be divided into three categories: (i) course materials, such as fodder eaten by livestock; (ii) grains, fruits, vegetables and other edible portions, eaten by humans and livestock; and (iii) dense stems and leaves which may be used for fuel, shelters or utensils. The paths of energy and material flow between plants and the consumers follow simple consistent patterns that are more or less similar in most agricultural systems. Agroecosystems have relatively simple cycle compared to other ecosystems that form complex food webs.

Bangladesh includes a wide range of environmental conditions. Due to its complex physiographic conditions and variations in soil characteristics, environmental diversity occurs not only at national and regional levels but also at the village levels. In fact, small-scale complexity of soil and hydrological conditions are important characteristics of Bangladesh environment. Considerable variability in moisture, temperature, and flood regimes creates different agroecosystems within a very short distance. Flood regimes determine the cropping intensity of an agroecosystem. On the basis of (i) physiography (land forms and parent materials), (ii) soils, (iii) depth and duration of seasonal flooding, (iv) length of rainfed kharif (summer) and rabi (winter) growing periods, (v) length of the pre-kharif period of unreliable rainfall, (vi) length of the cool winter period, and (vii) frequency of occurrence of extremely high (>40BAC) summer temperature, thirty agroecological regions and eighty subregions have been identified in Bangladesh. In each of the regions, even in the subregions there exist considerable variability in soil properties and water regimes which determines the crop suitability in an agroecosystem. Thus, in an agroecological region different crop-based agroecosystems have been functioning year after year in Bangladesh.

Recent research findings have indicated an imbalance in agricultural inputs which has already created threat to the proper functioning of the agroecosystem of the country. Serious land degradation problem has aggravated this situation in different agroecological regions of the country. [Sirajul Hoque]