Ahmed, Abul Mansur (1898-1979) journalist, lawyer, politician and a litterateur. He was born at the village of Dhanikhola in Mymensingh district in 1898. His father's name is Abdur Rahim Farazi and mother's name is Mir Jahan Begum. He passed the matric from Nasirabad Mrithunjoy Vidyalay in 1917, the Intermediate from the Jagannath College of Dhaka in 1919 and the BA from Dhaka College in 1921. Then he studied law at Ripon Law College of Kolkata from 1926 to 1929 and Passed the BL examination. After getting law degree, he started practicing law in Mymensingh and there he was involved in his profession till 1938. 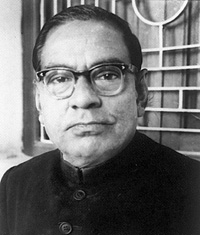 Abul Mansur Ahmed was a professional journalist. Among the mentionable periodicals that he worked for were the Soltan Mohammadi, the Musalman, Krishak, Navajug and Ittehad. He was the editior of the weekly Soltan and Mohammadi (1923-1926). From 1926 to 1929 he worked in the musalman periodical as a journalist. He was appointed editor in the daily Krishak in the month of December, 1938. In October, 1941, he took service in the editing department of the Navajug. He was the editor of the daily Ittehad from 1946 to 1948.

Abul Mansur Ahmed also worked as a political activity. He took active part in the khilafat and non-cooperation movement. Though his political career started with the Participation in the Khilafat and Non-Cooperation movement, he was very doubtful about the reality of this movement. He was not so happy with a movement in the phase of All Indian Perspective on the basis of non-Indian issue, his call for the non-cooperation in that movement and with the aim of achieving Swaraj. In this' respect, he felt that Gandhi was not realistic.

Though Abul Mansur Ahmed was connected with Congress party, he was against the policy of the Central Congress. He supported the Politics of Swarajya Party' of chitta ranjan das (1870-1925) and he was interested in the effort that maintained to make friendship but-wean the Hindus and the Muslims though the bengal pact of 1923. Then he joined the Proja Samiti of Bengal and performed the works of the Krishak Proja Samiti organisation with competence in Mymensingh district. At the same time, he was the Vic-President of the Mymensing district congress committee.

Abul Mansur criticizing the Programmes of the left-wing congress based kishan Sabha and Kishan Samiti, used to say that those programmes were merely a trick to restraint the Anti-Zamindar Movement. The Krishak Proja Party obtained quite a good result in the election of 1937. Hence, the leader of this party ak fazlul huq was expecting that the Indian National Congress would get support for a coalition government in Bengal. But the Congress did not agree to form a coalition government with the Krishak Proja Party. Than Fajlul Huq was compelled to form a coalition government with the Muslim League. Most of the members of the congress did not takes this attitude of the party easily Many nationalist politicians think that the Congress, to some extent is against the Muslim and at the same time. They disagree to form a coalition government in Bengal. As a result he left the Congress Party and inclined to the polities of Muslim League. In March, 1940 the Muslims of India demanded a separate homeland for them. Abul Mansur thought that the demand was logical. In the Conference of East Pakistan Renaissance Society, held in 1944, he said that on the ground of distinct cultural identity, the recessing for creating Pakistan was logical. He supported the demand for creating two separate self governing states taking too main Muslim arias in two places of India. In the later period, he gave emphasis on the identity of Bangali culture. In 1946-47 he raised the demand for creating United Independent Bengal jointly with Huseyn Shaheed Suhrawardy. But this demand did not materialize and in 1947 Bengal province also was partitioned. Then he demanded to include kolkata in East Bengal. But that demand too was unheeded.

Abul Mansur Ahmed played a vital role in the formation of the Awami Mushim League. He was the vice- President of the Awami League from 1953 to 1958. He was one of the main authors of the 21 points which were the election manifest to go the United front. He was elected member of the East Pakistan Provincial Assembly in 1954 as a candidate of the United front. In 1954, he was health minister under Huq ministry.

Abul Mansur Ahmed was elected member of the Pakistan Constitute Assembly by the member of the East Pakistan Provincial Assembly in 1955. He was minister for Education in the United front government of East Pakistan in 1956 and minister for Commerce and Trade in 1956-1957. After the Promulgation of Martial Law by Ayub Khan in 1958, he was imprisoned and was released in 1942. Then he took retirement from politics.

Though Abul Mansur Ahmed was actively involved in politics of various brands at different times, he was excessively known for a witty writer. His famous sarcastic works are Aina (1936-1937) and Food Conference (1944); novels, satya mithya (1953), Jiban Ksudha (1955) and Ab-e-Hayat (1964); his book of reminiscence, Amar Dekha Rajnitir Panchash Bachhar (1969) and Sher-e-Bangla theke Bangabhandhu (1972) and his autobiography Atma Katha (1978). For his contribution to literature he was awarded the Bangla Academy Prize (1960), the Independence Day Medal (1979) and the Nasiruddin Gold Medal. He died on 18 March, 1979. [Rana Razzaque]