Akbar (1556-1605) the great Mughal Emperor, who held a distinguished position among his contemporaries for his achievements as a conqueror, administrator and lover of art and culture. Akbar's accession, after the accidental death of his father humayun in 1556, was followed by the loss of Agra and Delhi to Himu, the general of Adil Shah Sur. After assuming the title of Raja Vikramjit, Himu proceeded to meet Akbar and Bairam Khan. In the decisive second battle of Panipat (1556), Himu was wounded, imprisoned and later on killed. Mughal rule was restored with the recapture of Agra and Delhi. 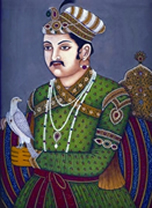 Akbar embarked on a career of conquests. At his accession Akbar did not seem to possess any definite territory. When he died in 1605, he had a vast empire extending from Kabul to Bengal and the Himalayas to Ahmadnagar. Akbar’s reign witnessed Mughal penetration into Bengal. Akbar sent his general munim khan against daud khan karrani of Bengal. Daud fled and Patna fell to the Mughals. Munim Khan next occupied Tanda, the capital of Daud, although the latter continued his rebellious activities in Orissa. Todar Mal joined Munim Khan to fight with the Afghans. In 1575 in the battle of Tukaroi, Daud was again defeated. In the mean time Munim Khan died and Khan Jahan Husain Quli, who succeeded Munim Khan, finally defeated and killed Daud at the battle of rajmahal in 1576. Bengal then nominally passed under the Mughals.

The zamindars of Bengal called the bara-bhuiyans, under the leadership of isa khan, however, defied Mughal authority and set up independent rule of their own. Akbar spent much of his time fighting them in order to elicit their allegiance. He sent Khan Jahan Husain Quli (1575-1578), Shahbaz Khan (1580-1585), Wazir Khan (1586-1587) and Raja mansingh (1594-1604) as subahdars of Bengal. They tried in vain to bring Isa Khan and his allies under the control of the Mughals. Ultimately, Isa Khan concluded a treaty with the Mughals by which he acknowledged the suzerainty of the Mughals.

Emperor Akbar, a versatile military and political genius, reorganised the administrative machinery and evolved an efficient system. He instituted a strong centralised government and divided the empire into twelve (later fifteen) subahs; Bengal constituted an important subah. His provincial government was organised on the model of the central government. According to Abul Fazl, Bengal was subdivided into 19 Sarkars and Sarkars into Parganas. Akbar developed a revenue system called the Jabti system, by which land was surveyed, classified, and the amount of revenue to be paid to the government was fixed on a sound basis. However, this system was not expanded to Bengal. As such, the revenue administration of Bengal subah was not organised on a sound basis before the time of murshid quli khan. Through the introduction of the Mansabdari system Akbar remodelled the army organisation. Under the system every officer held a mansab (rank) and was to maintain a quota of horses, elephants, beasts of burden, carts etc. They were paid either in cash or land grants.