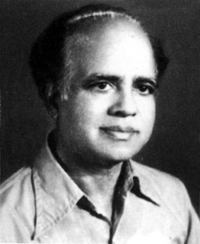 Ali, Shahed2 (1925-2001) an activist of language movement, educationist, cultural activist and a reputed author. Born at Mahmudpur village under Tahirpur Upazila of Sunamganj on 24 May 1925, Shahed Ali graduated from Sylhet m c college in 1947 and passed MA in Bangla Language and Literature in 1950 from Dhaka University. Shahed started his professional career in 1951 as a teacher of the Bogra azizul haque college' and subsequently served Rangpur carmichael college, Chittagong City College, Mirpur Bangla College and Abuzhar Ghifari College in Dhaka. With other compatriots, he founded the Tamuddun Majlis in 1948. Subsequently, he became its President. He was elected a member of the East Pakistan Provincial Assembly in 1954 from the Khulafa-e-Rabbani Party. He was also the secretary of Islamic Academy (later islamic foundation bangladesh) when it was founded in 1960. He served it for twenty years in different capacities and ultimately became the Director of its Translation and Compilation Department.

Shahed Ali wrote more than fifty books, amongst which he is acclaimed for the novel Hrday Nadi (1965) and six books of short fiction namely- Jibrailer Dana (1953), Ekai Samatale (1963), Sha’Nazar (1985), Atit Rater Kahini (1986), Amar Kahini (1987) and Natun Zamindar (1992). Bichar (1987), his only playlet, is admired in drama circles. Founder-editor of the weekly Sainik (mouthpiece of the Language Movement) since 1948, Shahed contributed to journals of Dhaka and Kolkata from pre-partition days. His first story Ashru was published in 1940 in the monthly Saogat when he was a student of Class VIII. He was also the editor of Prabhati (1944-46), the Dainik Buniyad, the Islamic Foundation Gabesana Patrika, Masik Sabujpata and Allama Iqbal Sangsad Gabesana Patrika. His translated works include Makkar Pathe, At-Tawheed, Adhunik Bijnan and Adhunik Manuser Itibrtta.