Ali, Syed Ameer (1849-1928) lawyer, spokesman on Indian Muslim concerns, and writer on Islamic history and society, was born on 6 April 1849 at Cuttack in Orissa. He was the fourth of five sons of Syed Saadat Ali, a descendant of a Shia family from Meshed in Iran. Ameer Ali's great-grandfather had migrated from Iran with the army of Nadir Shah in 1739, serving thereafter at the Mughal and Awadh courts. Soon after his birth his father, who had trained in yunani medicine, and was by inclination scholarly, moved the family first to Calcutta, and then to Chinsura, where they upheld in modest comfort the lifestyle of the ashraf elite. His family's origins were to influence strongly Ameer Ali's sense of his own identity, leading to some criticism of him as alienated from the Bengali environment of his own childhood. 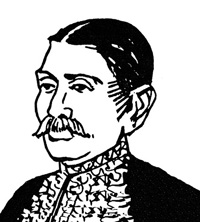 At a time when many Muslim families were reluctant to make use of English government educational facilities, Syed Saadat Ali, who had many English friends, took advantage of the new opportunities for his sons. The three eldest brothers were educated first in the calcutta madrasa, and subsequently at the Hooghly Collegiate School and Madrasa. They then entered government service. Ameer Ali soon surpassed his brothers’ educational attainments and prominence.

Assisted by very close relationships with the British teachers at the Hooghly Madrasa, and supported by several competitive scholarships, he achieved outstanding examination results, graduating from Calcutta University in 1867, and gaining the MA with Honours in History in 1868. The LLB followed in 1869, after which he began legal practice in Calcutta. He was already one of the few outstanding Muslim achievers of his generation. Initiation into Islamic learning had not meanwhile been neglected. He attributed to his mother a strong religious influence especially after his father's early death when Ameer Ali was only seven years old. The family employed a resident moulavi who taught him the Qur'an, Arabic and Persian. Later he received more advanced Arabic tuition outside the home. A significant influence in the forming of his lifetime's interest in the origins, rise and nature of Islamic society was the nearby Hooghly imambara, where the mutawalli, Maulwi Syed Karamat Ali Jaunpuri, befriended him while he was still a schoolboy, and included him in weekly discussions with local religious scholars. Consequently, the seventeen-year old Ameer Ali, assisted in the translation into English of Karamat Ali's Urdu work on the transmission of knowledge between Greek, Islamic and European societies, a theme which he would take up later in his own historical publications (Makhaz-i-uloom/or a Treatise on the Origin of the Sciences, trans. Moulavi Obeyd-Ulla al-Obeydee and Moulavi Syed Ameer Ali, Calcutta, 1867). He was to maintain his links with the Hooghly Imambara throughout his career in Bengal.

His LLB completed, Ameer Ali won a government scholarship to study in Britain. During this first residence in London (1869 to 1873) he was called to the Bar, but was also deeply involved in numerous political and social reform activities, ranging from discussions with the secretary of state for india on the problems of Indian Muslims, to campaigning with the nascent suffragette movement for British women's property and civil rights. He also lectured publicly on Indian Muslim problems, and published the first edition of his most famous work, The Spirit of Islam, which he had initially entitled, A Critical Examination of the Life and Teachings of Mohammed (London, 1873). His most characteristic ideas on the progressive nature of the Islamic dispensation, its rationality, the superiority of medieval Islamic society to medieval Christendom, but the need in the late nineteenth century for some social changes, particularly concerning the position of women, were explicitly stated in that youthful publication.

On return to Calcutta Ameer Ali quickly made his name not only in legal practice where he rose from being chief Presidency magistrate (1879) to becoming a judge of the High Court of Calcutta (1890-1904), but also as a teacher and writer on the 'Personal Law of the Mahommedans'. His lectures to Calcutta University law students in the 1870s and 1880s were published in two volumes (1880 and 1884) and have been in print ever since as Mahommedan Law, Compiled from Authorities in the Original Arabic (eg, 5th edition, reprinted New Delhi, 1985). In these judicial roles he was able to influence Muslim opinion on some important social issues, notably polygamy, which he had criticised in his earlier Critical Examination. However, it was in the political sphere that he stepped most firmly into the controversies of the period. Other Muslims in Bengal had already begun to organise opinion on the need to regenerate their community. Ameer Ali, however, differed strongly with the hitherto most prominent of these spokesmen, Nawab Abdul Latif (1828-93), and favoured a more radical break with conservative social traditions. Ignoring Latif's Mohammadan Literary Society (founded 1863), which held monthly meetings on social as well as literary topics, Ameer Ali founded the National Mahommedan Association in 1877, which, after the affiliation of branches in other provinces of India, he renamed the central national muhamedan association.

His work for this organisation, of which he was the secretary for twenty-five years, justifies the claim that Ameer Ali was the initiator of the political awakening of Indian Muslims at a time in the 1880s when Sir Syed Ahmad Khan was urging non-involvement with politics. Critics argue, however, that his constantly loyal support for the Raj blunted the impact he might otherwise have had as a member of the Bengal Legislative Council (1878-83) and the Governor General's Legislative Council (1883-85); an example being his willingness to compromise during the Ilbert Bill furore. He was also reluctant to play an active part in the implementation of social reforms, such as the education of women, which he had advocated earlier. It is to his credit, however, that he made effective use of the press throughout his period of judicial and political service to disseminate some challenging views in both British and English-knowing Indian circles. Among his seminal publications were a new edition in 1891 of the Critical Examination (now subtitled The Spirit of Islam on the advice of his wife), and A Short History of the Saracens (1899). More topical concerns were strongly addressed in leading British journals, such as the Nineteenth Century, in which he published articles such as 'A Cry from the Indian Mohammedans' (1882) and 'The Real Status of Women in Islam' (1891).

His links with Britain were strengthened by frequent visits to London, where he married in 1884, in a Unitarian church, Isabelle Ida Konstam, who resided with him in Calcutta during the remaining twenty years of his service. He decided to retire permanently to England in 1904 and seldom returned to Bengal before his death in 1928, possibly because of Isabella's influence (their two sons went to public schools in Britain), but his own preference was also for a western-style family and social life. Throughout the twenty-four years of his life in retirement, however, he continued to play an active role in supporting Islamic causes and the advancement of Indian Muslims. These led him into public controversy with an Anglican cleric, Canon Malcolm Maccoll, over his criticisms of Christian civilisation in The Spirit of Islam; with Wilfrid Scawen Blunt, who had impugned his motives in his own publications; and with a broader spectrum of British public opinion over the so-called 'Bulgarian atrocities' and other matters connected with Turkey's role in the Middle East. In 1908 he founded, and became president of the London branch of the muslim league, and pressed for separate electorates for Muslims, a demand that was conceded in 1909. Events leading up to the First World War threatened his support for the Raj, which had been confirmed by his appointment to the Privy Council in 1909. However, using his many contacts in the Establishment, he continued to plead 'Muslim' causes, notably through establishing the British Red Crescent, and later through his support for the khilafat movement. Yet, absence from India when the Freedom Struggle was intensifying, effectively sidelined him from politics by the mid-1920s.

Indeed, Ameer Ali's greatest contribution was not political, for the confidence-boosting effects of his major publications which eulogised the 'golden ages' of Islam, and stressed the need for Muslims to come to terms with some of the changes caused by colonisation and Westernisation were his major achievements. If he had a lawyer's approach to historical evidence, both in highlighting Islamic achievements and in condemning the shortcomings of other cultures, such buttressing of Muslim self-esteem was certainly a need of the hour. His progressive stance on the status and rights of women in Islam was one of his most notable contributions. While he was admired by Islamic 'modernists' for his leadership in these causes, he was criticized by others for his disinterest in the concerns of the Bengali masses. However, his voice, particularly in the crucial period of the 1870s, when Muslim spokespersons were few, was very influential in countering much misinformed or prejudiced Western criticism of Islamic history and society.

Syed Ameer Ali died in England on 3 August 1928. He was survived by his wife and two sons, Warns Amir Ali and Torick Ameer Ali, who followed his instructions to destroy his private papers. His 'Memoirs', published in five issues of Islamic Culture (1931-1932), were compiled by the family. [Avril A Powell]