Ant (pipda) insects of the family Formicidae, order Hymenoptera. There are about 8,000 different species of ants, live in organised communities and are known as social insects like bees, wasps and termites. About 250 species of ants are known from Bangladesh, and these probably represent only a fraction of the total ant fauna present in this country. Some of the most familiar species of ants are locally known as Lal pipda, Kalo pipda, Deyo pipda, Bis pipda, Khude pipda, etc. An ant community, commonly called a colony, may have a dozen or many thousands of members. The members are divided into three castes: queens, workers, and males. Each colony may have one or several queens, many female workers and a few males. Usually in spring, a number of males and queens grow in a nest. 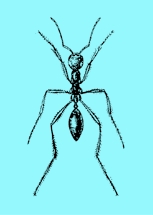 They are winged, swarm out together and fly off for mating. After mating, a young queen starts a new colony by laying eggs which she continues to do for the rest of her life. The young queen takes care of the first generation of ants she produces, which consists entirely of female workers. They take over the duties of food gathering, caring for the queen and the young, enlarging and repairing the nest.

The only duty of males is to mate with the young queens and they die soon after mating. The largest workers are known as soldiers who have a very big head and large mandibles. They defend the colony from enemies. Some ants construct their homes underground. Tropical weaver ants construct nests on tree leaves. Others build their nests under rocks or rotten logs. Some dwell inside living plants or chew tunnels in wood to make a nesting space.

Ants communicate with one another in various ways. When two ants meet, they smell each other with their antennae and sometimes by giving off chemicals called pheromones. They play an important role in the balance of nature. They eat large number of insects and so help keep them from becoming too plentiful. Ants, in turn, are important food for birds, frogs, lizards, and many other animals. Ants may be both beneficial and harmful to farmers. Some of the common species of ants in Bangladesh are included in the genera Aenictus, Anochetus, Camptonotus, Cardiocondyl, Diacamma, Dorylus, Monomorium, Odontomachus, Phidole and Tetramorium. [Badrul Amin Bhuiya]