Apiculture (moumachhi palon) care and manipulation of colonies of honeybees (Apis species) so as to enable them to produce and store a quantity of honey exceeding their own requirements. This lead to commercial production of honey and other by-products. Foraging of bee for nectar and pollen leads to cross-pollination of crop plants. There is no statistics of annual honey production recorded by the beekeepers of Bangladesh. However, the honeybee's chief value lies in its ability to pollinate over 60 agricultural crops and thus increase the production of fruits and seeds. 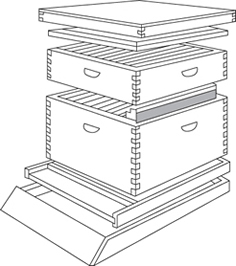 In Bangladesh the most important honeybee species from the commercial standpoint is Apis cerana indica. In addition, one wild species, Apis dorsata makes hive in forests, on large trees around dwelling houses, and even attached to the cornice. Many professional honey collectors of Bangladesh hunt Apis dorsata colonies as a source of honey. These professional honey collectors live mostly in areas close to forests, particularly the sundarbans, Madhupur, and other forest enriched areas of Bangladesh.

However, most of the honey consumed now is produced according to refined management methods. Apiculture most likely began with the realization that it was better to safeguard future colonies rather than to destroy them in the process of gathering honey. To accomplish this various substitutes for natural nesting sites for domestic species, A. c. indica were brought into use in Bangladesh also. This substitute nesting sites or man-made hives facilitate the removal of honey without injuring the bees. It is a box consisted of several frames having precise space of 1.0 cm that honeybees can pass through without instinctively connecting two adjacent surfaces with a bridge of wax. The concept of the "bee space" opened the way for development of this removable frame hive, which permit both the close examination of the bees and the nondestructive removal of honey. Numerous hive designs are available in Bangladesh, but a combination of trial, error, and research eventually led to the type of the hive in widespread use today made of wooden boxes with removable frames of comb. Beekeepers have standardized equipment so that parts will be interchangeable within an apiary.

Process of honey collection When combs are filled with honey and capped over, those are taken from the hive and the bees are removed from combs. The thin film of wax covering the cells of the comb is then shaved off with a sharp knife. After the combs are uncapped, they are put in the honey extractor and revolved at a high speed.

The honey is poured out of the comb by centrifugal force exerted against the sides of the extractor. Then the combs are reversed, and the other surface are emptied. Finally, the combs are returned to the hive to be filled again by the bees.

Commercial practice Commercial bee-keeping in Bangladesh is still in its infancy. Some successful beekeepers move to those areas where nectar-producing plants abound. The best known honey in Bangladesh is Mustard honey. Mustard is grown in many districts of Bangladesh as an oilseed crop. Drum Stick, Zizyphus jujuba, mango, and various other vegetables, fruits, forest and crop plants are also good nectar-producing sources. Just as each flower is different in its colour, shape, odour and design, so each flower produces a unique nectar.

Department of Agricultural Extension periodically organizes training programmes on bee-keeping at the upazila level. In such programmes they not only impart training on bee management but also provide beehives to the trainees for bee-keeping to ensure profitable honey production. Bangladesh Small Industries Corporation, and bangladesh institute of apiculture (BIA) also organise training for commercial and amateur bee-keepers with their experienced trainers. They also organise practical mobile bee-keeping during the winter season in major mustard growing areas of Bangladesh for successful pollination and honey production.

Some management aspects For successful bee-keeping some management aspects need to be taken into consideration. Often swarming results in population losses in hives which hampers the ability to produce honey. Crowded and overheated hives are conducive to swarming, and this tendency may be overcome by providing adequate ventilation and additional room in the hive. Requeening with young queens early in the season also prevent swarming. When bees are short of honey, sugar syrup (two part sugar and one part water) may be substituted. This is fed in an inverted can with a few small holes punched in the lid. American and European foul brood diseases are serious in Bangladesh.

There is no cure for American foul brood but may be prevented by burning the infected combs and bees. European foul brood may be prevented by requeening so that the vigor of the colony will be increased rapidly. A number of insects including ants and wax moth, birds, mice, and some other mammals often destroy combs. To prevent moth larvae, combs may be fumigated with paradichlorobenzene or ethylene dibromide in tight rooms. The usual method of keeping the ant out is to put the hive on a stand and to rest the legs of the hive in vessels containing oil or creosote. [Md Zinnatul Alam]