Atrai Upazila (naogaon district) area 284.81 sq km, located in between 24°32' and 24°42' north latitudes and in between 88°49' and 89°06' east longitudes. It is bounded by raninagar and manda upazilas on the north, natore sadar upazila on the south, SINGRA upazila on the east, baghmara upazila on the west.

Administration Atrai Thana was formed in 1916 and it was turned into an upazila on 1 August1983.

History of the War of Liberation A battle between freedom fighters and the Pakistan army was fought atvillage Bandaikhara on 19 September 1971. The Pak army plundered and set many houses on fire of the village and indiscriminately killed many villagers. The Pak army was challenged by the Muktibahini at a point close to Taranagar and Gaoillah villages. Nine boats carrying Pak troops were sunk by a surprise attack. During the War of Liberation the Pak army along with their collaborators killed many freedom fighters of the upazila. 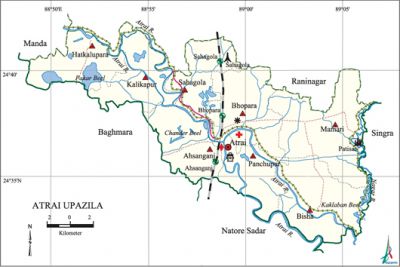 Marks of War of Liberation Mass grave 2 (adjacent to Sahagola Railway Station and river side of Bandaikhara).

Hats, bazars and fairs Hats and bazars are 12, fair 1 of which Ahsanganj hat and Shahebganj bazar are notable.

Natuural disaster The follod of 1998 dismantled the dam of the area causing serious damage to crops and settlements.Serious damage to properties were held as a result of dismandle of the dam.