Aurangzeb (1658-1707) the last great Mughal emperor. He came out victorious in the war of succession and ascended the throne of Delhi in 1658 with the title of Alamgir Padshah Ghazi. During his reign the Mughal empire witnessed expansion in the northeast, northwest, and in the south. 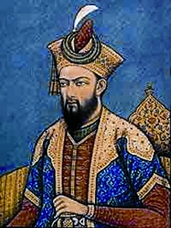 In the northeast the Mughals acquired territorial gains in Assam and Chittagong. During the war of succession the Ahoms had occupied Gauhati for which hostilities were inevitable between the two sides. mir jumla who replaced Prince Shuja as governor, overran Cooch Bihar and penetrated deep into Garhgaon, the capital of Assam. The rainy season proved to be unfavourable for the Mughal forces which suffered heavy losses. By the treaty concluded the Assam king Jayadhvaja agreed to pay tribute and a heavy war indemnity and surrendered half of the province of Davrang to the Mughals.

Mir Jumla transferred the capital of Bengal from rajmahal to Jahangirnagar (Dhaka) in order to keep a close watch upon the Arakanese, Maghs and the Portuguese pirates. He allowed the English east india company to enjoy the trading rights granted to them by Emperor shahjahan and Prince Shuja.

shaista khan, who succeeded Mir Jumla, was already 63 when he came to Bengal and held the post for two terms: 1663-1678 and 1679-1688. Kuch Bihar remained under his control all through his tenure of office. He reorganised the Mughal navy and planned to capture Chittagong from the Arakanese. Chittagong was also a centre of the portuguese commercial and piratical activities. The Mughal forces under Buzurg Umed Khan, the subahdar's son, occupied Sandvip as a first step to advance against Chittagong. Meanwhile there was a rift between the Maghs and the Portuguese living at Chittagong. The Portuguese welcomed the Mughal advance against the Arakanese, who were forced to retreat being defeated in a naval battle fought in 1666. The Mughal forces entered Chittagong and freed a large number of Bengali men and women, made captive by the Arakanese. Chittagong was named Islamabad by the orders of the emperor.

The English East India Company's trading activities in Bengal developed after 1660. In 1672 Shaista Khan granted the English duty free right to trade and they established trading factories at Haripur, Patna and Qasimbazar. The factory at Hughli had already been established in 1651. In spite of all these their relationship with Shaista Khan was strained because local Mughal officers used to demand payment of tolls and sometimes would confiscate vessels with goods.

During the subahdari of ibrahim khan (1689-98) the English agent job charnock established an English factory at Sutanuti (in 1690), which marked the foundation of Calcutta. The rebellion of shobha singh, a zamindar of Burdwan, gave an opportunity to the English to fortify their settlement at Sutanuti in 1696. In 1698 the emperor's grandson and the next subahdar of Bengal, prince azim-us-shan, allowed them to purchase the zamindari of three villages of Sutanuti, Kalikata and Govindpur on payment of Rs 1200 to the old proprietors. The company built up a fort there and named it fort william in 1700.

In the conflict between Azim-us-Shan and diwan murshid quli khan, the emperor upheld the cause of the diwan and permitted him to shift his headquarters from Jahangirnagar to Maksusabad, while Azim-us-Shan was asked to shift the capital to Patna. Maksusabad was soon named Murshidabad after the diwan. Dhaka thus lost its honour of being the capital of Bengal subah during Aurangzeb's time.

A devout Sunni Muslim, Aurangzeb followed a simple, pious and austere life. He enforced the Quranic laws in the governance of the country, practised simplicity in state functions and forbade music at the court. An ardent student of Muslim theology, he initiated the compilation of the comprehensive legal digest known as the Fatwa-i-Alamgiri.

Aurangzeb is credited for maintaining the largest Mughal empire, but at the same time the vast empire began to show signs of gradual disintegration during his lifetime. The struggle for succession, the annexations of vast territories, the wasting struggle with the Marathas and the weaknesses of the imperial officials are some of the causes of the gradual decline of the Mughal empire after his death (1707). [KM Karim]