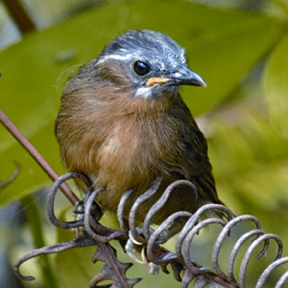 Babbler birds of the large, diversified family Sylviidae, order Passeriformes. Previously these birds were placed under family Muscicapidae. Babblers have soft and fluffy plumage, and are predominantly brown birds. They are found primarily in wooded areas and are widespread throughout the warmer areas of the Old World. Some live in thick scrub where they are difficult to locate except by their noisy calls, eg some of the laughing thrushes. In parts of South and Southeast Asia, babblers form an important part of the bird communities.

Many of them have a loud, noisy babbling cry. The majority of species are insect-eaters. The larger species also eat small vertebrates. Many also eat berries, and some feed on nectar when it is available. These birds tend to be sedentary, defending their territory year-round. Many are group living social birds, and remain together almost all the time. In some species they roost together, sitting tightly packed, shoulder-to-shoulder along a branch. The group jointly defends the territory. They breed communally. The dominant pair of the group builds the nest; others help in building and defending the nest and in raising the young. Young males stay within their own group and breed by inheriting the territory when their father dies. When the group becomes large enough, it generally breaks-up. The young males then occupy a new territory taken from a neighbouring small group. The young females disperse to other groups nearby, presumably to avoid inbreeding. There are some 255 species in this group, varying in size. In Bangladesh the family Silviidae has 74 species including warblers (28 species; all are migratory), laughing thrushes, tailor birds, parrotbills, schimitar babblers, etc. [Md. Anwarul Islam]