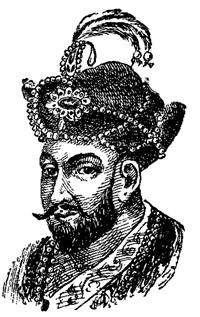 Babur (1483-1530) founder of the Mughal dynasty in India. From his father's side Babur is a descendant of Amir Taimur (1336-1405) and from mother's side, Chengiz Khan. He was born in Khukand in Turkistan in 1483. His father Omar Sheikh Mirza was the chieftain of Fargana. On the death of his father in 1494, Babur became the chief when he was a minor. Being ousted from his kingdom by his rivals, Babur left Central Asia and captured Kabul in 1504. He assumed the title of Padxa (also Badxa) in 1508.

Through series of conquests, Babur became the sole ruler of Central Asia by 1511. But soon he was ousted by the Ujbeks and was forced to come back to Kabul in 1514. Being unsuccessful in establishing any strong and lasting foothold in Central Asia, Babur turned to India for setting up an empire. In 1515, he subjugated several eastern principalities hitherto ruled by tribes like the Bajaur, Suat and Yusufzai. Between 1519 and 1520, he conquered Vira, Sialkot and Saidpur. Babur conquered Kandahar in 1522. In the battle of Panipat (1526), he defeated Ibrahim Lodi in north India and inaugurated the process of establishing the Mughal dynastic rule in India.

At that time, the ruler of Bengal was Nasiruddin nusrat shah. Defeated at the hands of the invading army of Babur, the Afghan chieftains took shelter in the realm of Nusrat Shah. In order to dislodge them from Bengal, Babur proceeded to punish Nusrat Shah and came up to Gugra River in 1527. Before he actually attacked Bengal, Babur wanted to know about Nusrat's attitude to his sovereignty by sending an envoy with a letter to Nusrat's court. Nusrat did not reply and instead detained the envoy for a year. But in 1529, Nusrat showed gesture of neutrality and sent an envoy to Babur's court with considerable appeasing gifts. Babur became pleased with the neutral stand of Nusrat Shah and abandoned his plan of attacking Bengal.

The Afghan chieftains tried to get back their realms by attacking Babur's kingdom but failed to make any breakthrough. Being angered, Babur resolved to subdue Nusrat Shah. He conquered Trihut and defeated several Afghan chiefs on his way to Bengal proper. Babur came up to Buxar and warned Nusrat to behave and dismantle his camps near the Gugra River. But Nusrat refused to accede to Babur's demand. Babur thus launched an attack on the forces of Nusrat Shah and routed his defensive army. This victory led the extension of his empire up to the eastern bank of the Gugra River. For strategic reasons, Babur refrained from making further inroads into the Bengal kingdom. Nusrat Shah acceded to all demands of Babur and kept Bengal free from the Mughal invasion for the time being. Babur died in 1530. [Golam Kibria Bhuiyan]