Bacteria a group of single-celled microscopic organisms without any organised nucleus. There are many forms of bacteria, the common being cocci (spherical), rods (cylindrical) and spirals (cylindrical with twists around the long axis). There are about 15,000 described species. In Bangladesh several hundred species of bacteria are known. Although the general impression about the bacterium as being a germ and hence harmful to man, is not correct. The group has many useful attributes, and indeed the bacterial world is critical in maintaining the biotic balance. Decomposition of dead organisms into simpler organic compounds is essential for recycling of organic matter, a job that is efficiently done by bacteria. 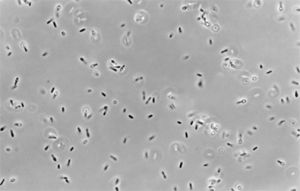 The bacteria also are responsible for fixing the bulk of nitrogen from air in a form that can be readily utilised by living organisms. Some bacteria are particularly efficient in fixing atmospheric nitrogen and in Bangladesh, species of Azotobacter and Clostridium fix atmospheric nitrogen directly. Bacteria such as Rhizobium form nodules in the root system of the leguminous pants and assist in nitrogen fixation. Human intestine carries a large population of bacteria, mainly Eschericia coli, Lactobacillus and Streptococcus, which provides both nutrients for the host and maintains proper condition within the intestine for normal functioning. In cattle and other livestock animals, the intestine houses special bacterial communities that help in the digestion of cellulose, which is present in large quantities in the grass, which these animals eat. Bacteria also produce many essential drugs such as antibiotic and industrial chemicals, and play important role in the fermented food industry.

Nevertheless, many dreadful diseases are caused by bacteria including plague, tuberculosis, sexually transmitted diseases such as syphilis and gonorrhoea, enteric illnesses such as cholera, bacillary dysentery, typhoid fever, and diseases of the respiratory tract such as pneumonia, and infection of the brain (meningitis). In Bangladesh it has been noted that Corynebacterium diphtheriae is responsible for diphtheria, Mycobacterium tuberculosi for tuberculosis, Vibrio cholera for Cholera, Diplococcus pneumoniae for pneumonia, Clostridium tetani for tetanus, and Salmonella typhosa for typhoid. In plants, the bacteria that cause disease include among others, Xanthomonas oryzae for bacterial blight of rice, Pseudomonas solanaceanum for wilting disease in tobacco and Xanthomonas citri for citrus canker diseases in citrus plants. Of the numerous species of bacteria, however, only a few, perhaps less than 5% of the species, are actually pathogenic or disease forming. [Zia Uddin Ahmed]