Badhya Bhumi Smriti Soudha (Slaughter-place Memorial) was built to commemorate the death of some of the nation's finest intellectuals and others, who were killed at the very end of the war of liberation (1971) by the Pakistani army with the help of their collaborators at Rayer Bazar brick field of Dhaka. The memorial edifice was constructed at the place where the mass killing took place. Among the people killed indiscriminately were educationists, physicians, journalists, writers, film directors and other professionals.

In 1993 Government of Bangladesh decided to erect a memorial at the site of this barbarous act. The Ministry of Housing and Works Department and the Institute of Architects Bangladesh jointly organised a national level architectural competition for the design of the memorial. 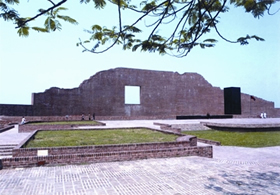 Out of 22 entries the jurors selected the design proposal of Architect Farid Uddin Ahmed and Architect Md Jami-al-Shafi. Public Works Department was responsible for the implementation of the project and its completion took about three years (1996 to 1999). A square grid of 15.24m by 15.24m has divided the whole site of 3.51 acre. The main platform is raised 2.44m above the street level.

The main element of the monument is the 17.68m high, 0.91m thick and 115.82m long curved brick wall, representing the original brickfield of Rayer Bazar where the dead bodies were found. The wall itself is broken at the two ends, demonstrating the depth of grief and sorrow. A 6.10m by 6.10m square window at the south-west side of the wall permits visitor';s view to reach the sky behind, that also scale down the immense wall. In front of the curved wall is a still water body from which rises a black granite column, which represents grief.

The main entry to the memorial is at the southeast corner of the site that places the visitor in front of a Banyan tree. This tree represents the original Banyan tree at the nearby Physical Education College where the martyrs were tortured first and then brought to this brickfield to be killed. Apart from the Banyan tree, which is evergreen, all the other trees used in the landscaping are deciduous. They remain leafless during the month of December and this adds to the sense of grief during the Intellectuals Martyr Day (14 December), observed every year.