Administration Bahubal Thana, now an upazila, was formed in 1921. 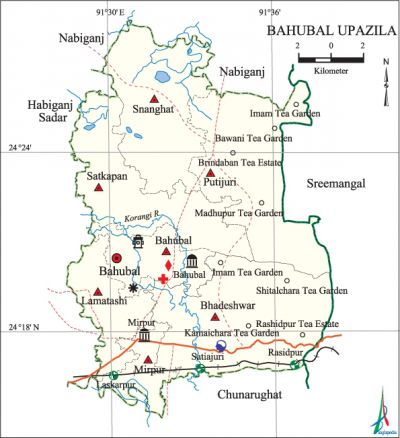 Historical events Afghan Chief Khwaja Osman left Bukai Nagar Fort and established shelter at Putijuri of present Bahubal upazila on the foot of the Giripal. He built a fort there which had strategic importance for defense. However, the Mughal took the advantage of the fort when his brother evacuated it. Finally Khwaja Osman's army was defeated at village Daulambapur of Maulvi Bazar district about 9 to 10 km on the east.

Hats, bazars and fairs Hats and bazars are 12, fairs 3, most noted of which are Putijuri Bazar, Bahubal Bazar, Mirpur Bazar, Chandrachurir Mela and Dhannakhalir Mela.