Baigunbari Hunting Park was a hunting and pleasure park of the Nawabs of Dhaka. Baigunbari is located at Sadullahpur mauja, Biralia Union, savar. Although khwaja alimullah started the work of setting up the park, it was completed during the time of Nawab Abdul Ghani. The natural setting of this hilly forest area was very conducive for breeding animals and birds for hunting. The Nawab of Dhaka proclaimed the forest land of Sadullapur as a wildlife sanctuary. Because of wide grounds on either side of a lake the area had an appropriate ambience for animals and birds as well as for hunting. The Nawab of Dhaka used to bring various species of indigenous and exotic deer, peacocks, wild-cocks, francolin partridges, hares etc and set them free in the forest for breeding. In addition, there used to be plenty of huntable hogs and various types of birds on the banks of the lakes of the forest. No one except persons close to the Nawabs could hunt there. In 1895 the Nawab gave warnings to unauthorised hunters in his forest area by putting notices in newspapers. He announced that those who would be found hunting without permission would be prosecuted and would have to pay compensation. 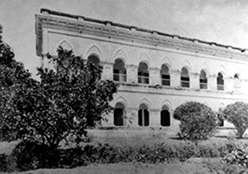 There were adequate arrangements for hunting at Baigunbari. On many occasions the Nawabs took along high government officials and gave them the opportunity to enjoy the pleasures of hunting. On many an occasion the English went there for hunting with the permission of the Nawabs.

The Nawabs of Dhaka and their family members and retinue used to stay at Baigunbari in different seasons of the year. Many elephants, horses and servicemen were used during those hunting trips.

Different buildings were constructed at Baigunbari for lodging, entertainment and pleasure. There was a central drawing room (Sadarkotha), a Rang Mahal, lodges, and an Andar Mahal for ladies.

There were arrangements for servants and armed footmen. The most attractive building in Baigunbari was a two-storied palace. The open verandas with eleven semi-circular arches on both floors of the palace were spectacular. Though one-storied, the Andar Mahal had similar arcaded veranda. The palace area was adorned with different species of indigenous and exotic trees along with gardens of flowers and fruits.

Nawab Ahsanullah built a mosque and dug out two large ponds. Although the beautiful structures of the Nawabs of Dhaka are now gone, the mosque and its adjacent large pond still survive. The dilapidated house of the Nawabs is now used as a revenue collector's office. A market, which has developed here, is now called Sadullahpur Bazar. The Nawabs of Dhaka used to go to Baigunbari by launches or beautifully decorated large country boats (bajra) through the Buriganga and Turag rivers. One could easily reach the brick-built ghats of Baigunbari through a canal that flowed from the Turag river. This ghat is now gone and the canal has also silted up. In 1896 the silt of Turag River was cleared in order to facilitate the journey to Baigunbari. On March 4, 1885 a telephone line was set up between Dhaka and Baigunbari.

In 1860 Nawab Abdul Ghani planted a tea garden at Baigunbari area by cleaning about 30 bighas of land. He planted kachar seeds and in 1867 the garden produced about one and half maunds of tea. Nawab Ahsanullah developed the tea garden further. In 1892 and 1893, 4709 and 1385 maunds of tea respectively were exported to Calcutta from Dhaka. Almost all the exported tea was from the Nawab's garden. The tea garden of Baigunbari did not survive because of unfavourable environment and weather. [Mohammad Alamgir]