Baitul Mukarram Mosque is the National Mosque of Bangladesh. Its construction began on 27 January 1960 and has been going on in phases. In the late 1950s Dhaka grew very rapidly. Abdul Latif Ibrahim Bawani first came up with the idea of building a grand mosque with a large capacity. The 'Baitul Mukarram Mosque Society' was formed in 1959 to facilitate the project. Land was allocated for the mosque complex at the meeting point of Old and New Dhaka. The site was also in close proximity to the central business district of the city. Architect T Abdul Hussain Thariani was commissioned to design the mosque complex. The plan included shops, offices, libraries and parking areas within the complex. 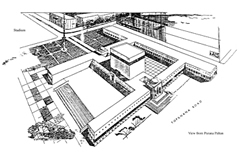 The design of the mosque reflects the architecture of the period as can be seen from the use of a white and almost cube-form for the main building. A Mosque without a dome over the roof of its main prayer hall must have been a unique experiment. The main building is eight storied and 30.18 metre high from the ground level. According to the original plan, the main entrance of the mosque was to be on the eastern side. The shahan on the east is 2694.19 square metre with ablution space on its south and north sides. The two shallow domed entrance porticoes compensate the absence of a dome on the main building, one on the south, and the other on the north. The elevation of these porticoes consists of three horseshoe shaped arches, the middle of which is bigger than the rest. Two patios ensure that enough light and air enter the prayer hall. 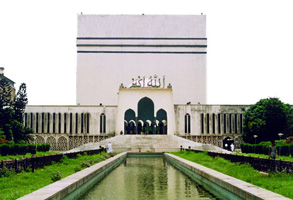 The area of the main prayer hall is 2463.51 square metre with a mezzanine floor of 170.94 square metre at the eastern side. The hall is surrounded by verandas on three of its sides. The mihrab of the hall is rectangular instead of semi-circular.

Excessive ornamentation is avoided throughout the mosque, since minimizing ornamentation is typical of modern architecture. According to Thariani's original plan, the minar was a detached structure on the south side of the main building. However, two new minars had been constructed according to a new plan.

The Baitul Mukarram mosque is modern in its architectural style. But it has not discarded traditional principles of mosque architecture. It has found its place in the hearts of the Muslims because of the resemblance of its form to the famous Kaba at Mecca. [Md. Shahidul Amin]