Banana (kala) a familiar tropical fruit. From its native southwestern Pacific home, the banana plant spread to India by about 600 BC and later on it spread all over the tropical world. It is possibly the world's oldest cultivated crop. It even spread into the Islands of the Pacific and to the West Coast of Africa as early as 200-300 BC. Banana (Musa paradisiaca, family Musaceae) is one of the tallest of the herbaceous plants with a pseudo-stem. 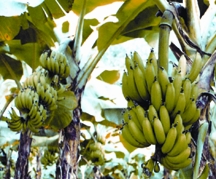 Its robust treelike soft stem is composed of the sheathing spiral leaf bases, which contains fibres of sufficient strength to keep the tree erect. At the top of the stem there is produced a crown of large elongated oval deep-green leaves. The leaves are up to 365 cm in length and 61 cm in width, with a prominent midrib. Each plant produces a single inflorescence, which develops from the rootstock and pushes its way through the pseudo-stem emerging in the centre of the crown.

The inflorescence is a drooping spike, the lower flowers are female and the upper flowers are male, and the bracts are large. Ultimately, the drooping inflorescence develop into the bunches of bananas. Bunches consist of five to fifteen clusters or hands, and each hand contains from six to twenty individual banana (sometimes one or two are fused together). The fruits of the cultivated banana are modified berry and lack seeds but some of the wild species produce normal seeds. As soon as the tree bears, it dies or is cut down, and suckers develop from the rhizomes, which give rise to new plants.

The commercial production of bananas for export is an important business in several countries. Jamaica, Mexico and Central America supply about 85% of the total output. In different countries about 300 varieties of bananas are grown, of which a vast majority have been growing in tropical Asia. The total annual production of banana in 2005-06 in 1,38,360 acres of land in Bangladesh is 9,09,060 metric ton. The banana grows almost everywhere in the country throughout the year. The principal banana growing areas however, are Rangamati, Barisal, Rangpur, Dinajpur, Noakhali, Faridpur, and Khulna. The common species that grow in Bangladesh are Musa cavendishi, M. oranta (Sagar kala), M. paradisiaca sub-species paradisiaca (Kancha kala), M. paradisiaca sub-species sapientum (Kala), and M. sapientum sub-species sylvestris (Aita kala). The other popular varieties are locally familiar as Chanpa, Sabri, Singapuri, and Mahersagar. Besides these, some other wild varieties of bananas are also grown in Bangladesh; among those, Musa textilis (Pahadi kala) is important for good quality fibre.

The banana is used both as vegetable (sub-species paradisiaca) and as a dessert fruit (sub-species sapientum). The fruit has a high content of carbohydrates with some fats and proteins. Banana juice is very nutritious and delicious. Alcoholic beverages like banana wine, brandy, bear, vinegar etc are distilled from the ripe fruit. Banana powder can be used as baby food and in the manufacture of chocolate and biscuits. As the ash of banana peel is rich in potash, it is used in preparing soap. The peel and the flesh of the ripe fruit contain antifungal and antibacterial substances. The aerial stem is a good source of edible starch.

Diseases and pests Both the plant and the fruit suffer from a number of diseases. The notable ones are the Panama wilt disease, Bunchy top disease, Leaf spot disease, Black leaf streak, Bacterial wilt, Anthracnose, and the Black head.

The Panama disease caused by a fungus Fusarium oxysporum variety cubense is a widespread and devastating disease in Bangladesh and other banana growing countries of the world. The disease is soil borne and the fungus enters the banana roots through fine laterals; its entry is aided by the burrowing nematode, Radopholus similis, which punctures the roots. The fungus prefers to grow in the vascular system which it blocks, causing the plants to wilt. The leaves turn yellow and chlorotic, the leaf blades hang down and wither.

Bunchy top is a viral disease, widely distributed in this subcontinent. The aphid Pentalonia nigronervosa is the only known vector of the disease. The important symptoms include the dark green phloem streaks and whitish streaks along the secondary veins. The disease is often accompanied by secondary root decay caused by fungi and bacteria. Banana plants of any age may show the bunchy top disease.

Bacterial wilt caused by Pseudomonas solanacearum is also a serious disease showing symptoms similar in some respects to those of Panama disease. At the initial stages bacterial wilt is characterized by the development of a yellowish colouration of the inner leaf lamina close to the petiole. Wilting of inner leaves follows this. Internal symptoms indicate a typical vascular infection.

Anthracnose is a disease of banana fruit caused by the fungus Colletotrichum musae. When the fruit approaches maturity, the fungus develops typical lesions on the ripe fruit. Latent infections of this disease appear as black circular specks on the developing and maturing fruits.

A number of insect pests attack the banana plants and fruits. The important pests of this country are the banana leaf and fruit beetle, Nodostoma viridipennis, the banana stem weevil, Cosmopolites sordidus and the weevil borer, Odoiporus longicollis.

The leaf and fruit beetle usually produces irregular patches. Scars on the fruits grow bigger as the fruit matures. The damage on the fruits affects the marketability of the crop. The stem weevil is usually considered as a pest of minor importance, but occasionally it does considerable damage to the growing plants. The grub of O. longicollis bores into the stem. When heavily infested the young plants may die, and older plants may survive with reduced vigour. [Md Mahfuzur Rahman and SM Humayun Kabir]