Bandar Thana (Chittagong Metropolitan) with an area of 20.04 sq. km is located in between 22°16' and 22°20' north latitudes and in between 91°45' and 91°49' east longitudes. It is bounded by halishahar and double mooring thanas on the north, patenga thana on the south, karnafuli thana and Karnafuli river on the east and bay of bengal on the west. 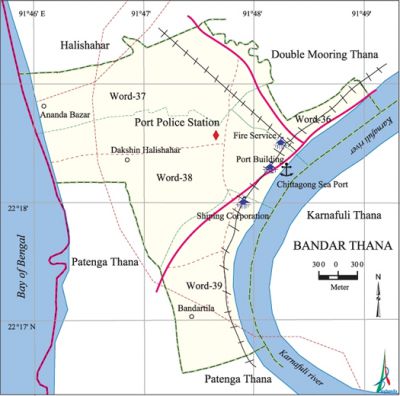 Historical of the War of Liberation In 1971, the freedom fighters (naval commandos) of the Bandar thana conducted a number of successful operations against the Pak army and damaged a number of enemy ships by mine explosion. The Pakistan army, on the verge of their defeat, planted mines in order to destroy the port. After 16 December 1971, the USSR Naval Forces sent experts who conducted nine-sweeping operation for about three months. Several Soviet mariners were killed in this mine sweeping operation.