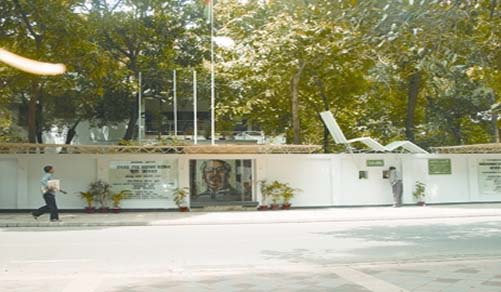 Bangabandhu Memorial Museum is situated on the old No 32 Road of Dhanmondi Residential Area of Dhaka. The house of bangabandhau sheikh mujibur rahaman, Father of the Nation and the first President of Bangladesh was turned into Bangabundhu Memorial Museum. Bangabundhu and other members of his family were killed by some derailed members of the army in this house on 15 August 1975.

There are different rare photographs of Sheikh Mujib's entire life and many reminiscent objects of last days of his life in the house. Besides, different things that were used by Bangabandhu have been preserved in the house. The whole house bears witness to the frightful incident of 15 August 1975. Its walls and stairs bear marks of several bullet holes. The house is a three-storeyed building is called now Bangabandhu Bhaban. In 1997 the house was transformed into a museum. The Museum remains open from 10 am to 6 pm everyday except Wednesday. It also remains closed on all Government holidays. [Zobaida Nasreen]