Bangabandhu Sheikh Mujibur Rahman Novotheatre an ultramodern Planetarium Novotheatre. It has been planned to be installed as a non-formal Science Education Institute in Dhaka in 1995. To inculcate positive scientific temper in the mind of people specially among the youths and to create interest in astronomy through entertainment the Novotheatre has been inaugurated by the Ministry of Science and Information and Communication Technology on 5.46 acres of land at Bijoy Sarani, Tejgaon on 25 September 2004. Architect Ali Imam made the architectural design of the Novotheatre. Total expenditure of the project was Taka 1231 million which has been provided entirely by the Government. Equipments of the planetarium have been supplied by GOTO Inc., Japan. The Novotheatre was named as 'Bhasani Novotheatre' after the name of the great public leader maulana abdul hamid khan bhasani. The Novotheatre has been opened for public on 27 September 2004. 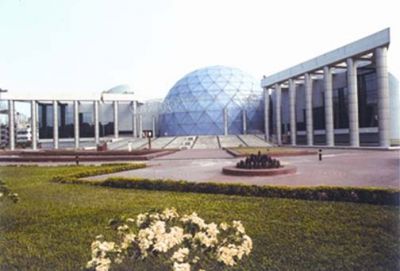 At bangabandhu sheikh mujibur rahman Novotheatre two film shows are displayed. The film of Planetarium Show 'Journey to infinity' moves the audience to solar system, which unfolds the ultimate limit to the visible universe. Another Large Format Film 'Aei Amader Bangladesh' is running from 9 August 2009. The Show represents our independence and important locations of our cultural heritage. Total seat capacity of the Novotheatre in each show is 275. The price of each ticket for Planetarium show is Taka 50.00 only. People can buy tickets through Teletalk mobile phone by sending SMS.

At present the Novotheatre is running 5 shows everyday. The Planetarium show time schedule is Saturday, Sunday, Monday, Tuesday and Thursday at 11am, 1pm, 3pm, 5pm and 7pm and Friday at10 am, 11:30 am, 3 pm, 5pm and 7pm. Wednesday is weekly holiday.

Besides the Planetarium shows there are some scientific exhibits at the Novotheatre such as the size of planets of Solar System, the model of Sun, Earth and Moon, size of stars and transparent Celestial Globe. Some photographs of world-renowned scientists are also available at the Novotheatre. There are a 150 seated well-furnished auditorium, 50 seated large Conference Room, hydraulic lifts and a car parking area having the capacity of 100 vehicles at the Novotheatre.

Computer Fair, Space Fair, Internet Fair, different seminars, scientific workshops etc. have been being organised at the Novotheatre regularly since its inception.

The Ride Simulator is running from 23 October 2008. Vertical and horizontal movement of a space shuttle about 30 degree angle which leads to the ancient world of pyramids and roller costar, mono rail, the time get to Egypt and the aircraft fighter. Total seat capacity of the Ride Simulator at a time is 30 and the price of each ticket is Taka 20.00 only.

Modern scientific exhibits have also been planned to be installed soon through new projects. The total posts of the Bangabandhu Sheikh Mujibur Rahman Novotheatre are 60. At present 40 officers and employees including the Director are working at the Novotheatre. [Md Monsur Hossain]