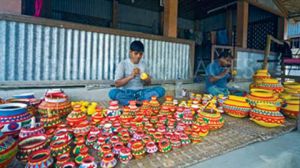 The chairman of the Board normally presides over the meeting. But in absence of the chairman, one member of the Parliament from among the members of the Board nominated by the chairman presides over the meeting. The funding of the foundation includes government grants, donation from any local authority, donation or grant from any foreign government or institution or international organisation with prior permission of the government, sale proceeds of books, journals published and of other assets of the Foundation. The Foundation can invest its fund in any sector approved by the government. [Zobaida Nasreen]