Bangladesh Shishu Academy is an autonomous body under the Ministry of Women and Children's Affairs comprises to the service of endorsement of physical, mental, cultural and exposure of implied talent of the children. Bangladesh Shishu Academy was established by the power entrusted to the Ordinance of the President in 1976. In present, there are 70 branches of the Academy around the country. The head office of it is located at Old High Court area.

About 50.53% people of the total people are children, ie about half of them are children. To make the children fittest, an initiative had been laid on for the purpose of Bangladesh Shishu Academy. At first, the central office of it was at Shegunbagicha area; later in 1977 it was shifted to the Old High Court area|thumbnail|300px|right| The activities of the Central Office are being carried on in four buildings having occupied by 3.69 acres. The buildings include: Administrative Office, Auditorium, Museum, Art Gallery and Publication and Lecture Theater building. 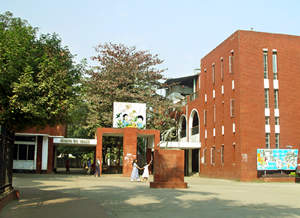 Although, at the very beginning of its inauguration, it carried out the activities within the sphere of Dhaka, in a while, the service was extended to the whole of country and many branches were scattered. Once the necessity to the expansion of the activities of the Academy to the grassroots level was emerged, the branches of the Shishu Academy were set up in the then bigger twenty districts in 1980-81. In the year1993-94, the new branches started its operations in the remaining 44 districts and 6 upazilas under 6 divisions experimentally. Bangladesh Shishu Academy is managed by a board of management comprising of 13 members. Director is the Chief of Executive of this organisation. In order to run various activities of this academy, six divisions have been arranged to viz. administration, publication, cultural, museum, library and accounts. The main function of the academy is an up-bottom process, which means all the functions are operated from the Principal Office. The district and upazila branches of the country follow the programs so authorized by the head office. At present, the head office is comprised of 20 officers and 56 employees. Each of the district-branches is occupied by one officer and four employees and each of the upazila branches is run by one officer and two employees. A management committee headed by a district administrator is authorised to manage district branches properly. Besides, there is a local committee headed by the Upazila Nirbahi Officer (Upazila Executive Officer) for the management of Shishu Academy in each upazila.'

A committee was formed in 1983. According to the recommendation of the committee, the main responsibilities of Bangladesh Shishu Academy are: 1. Publication of various books, monthly journal, encyclopedia etc. for the cause of children; 2. Organising various examination for children for learning and participating in different extra-curricular activities viz. quiz, debating, recitation etc; 3. Organising yearly National Award Giving Ceremony, Seasonal Competition and Juvenile Entertainment Fair;' 4. Creating opportunity for the children to participate in the international' painting competition;' 5. Making film for the children; 6. Sending children' cultural' group to various countries; 7. Managing juvenile museum enriched by history and tradition of Bangladesh and geographical information of various countries; 8. Celebration of' national, internationally and religiously significant days including' birth anniversary' of Rabindranath and Nazrul Islam, cultural and seasonal programs; and 9. Organising various cultural training programs relating to various issues of children.

The significant yearlong programs those are conducted by the Bangladesh Shishu Academy include: National Award Giving Ceremony for the Children. This competition has been being organised since 1978. Competitions are held in upazila, district, regional and national phase on 62 subjects related to literature, culture and sport. Each year almost 3 lacs children of the country get the opportunity to be exposed of their brilliance being participated to these competitions.'

Juvenile Amusement Fair is a significant and attractive programme of the Shishu Academy. Various apparatus and handicrafts made by the children are displayed there. Children from various associations present their cultural performances on that eve. Children Drama Competition is held in that fair in order to inspire the children of various associations of the country in juvenile drama.

Since 1980, various training sessions on various cultural issues have been introduced, which include: drawing, music, dance, dramatic art, recitation, elocution and reading, playing Tabla, Guiter, Spoken English and computer. Free training sessions are offered to the underprivileged children. These programmes have been equally held in the branch offices. Other programmes of the Shishu Academy include to making film for the children, organising Biennial International Children's Painting Competition, sending cultural delegation of children to overseas, preserving and exhibiting of the selective pictures, education tour, and conservation of nature and supplanting. Besides a journal entitled by Shishu or 'children' and children's books are published. The academy has published 501 books on various issues, which include: Children's Encyclopedia and Children's Encyclopedia on Science.

In order to encourage the prominent writers to write children literature, Bangladesh Shishu Shahitto Puroskar (Bangladesh Children's Literature Award) has been introduced since Bengali 1396 (1989). A writer is given this award for his/her overall literary works and the value of the award is 25 thousand taka. Apart from this, academy offers 'Agrani Bank Shishu Shahitto and Shishu Natto Puroskar' (Agrani Bank Children's Literature and Juvenile Award). This award has been yearly offered to the best book fewer than 7 divisions including book illustration since 1981.

Libraries for the children have been glorified in all branch offices including central office of the academy where local and foreign books suitable to the students are kept. Children, juvenile and researchers on juvenile issues may have the opportunity to be read being gathered in the libraries and the regular members may bring the books to home to read in. Any children/ juvenile of 5-16 year-old may obtain the membership of the library. In order to animate the memories of Jobeda Khanam, the Founding Director of the academy, the library of the central office has been named by 'Jobeda Khanam Children's Library' various education programmes based on library are held in order to promote habit of reading and make affinity to the libraries.

Children's Museum has been set up in order to make the children conscious on history and tradition of the country and to hand round knowledge. The Children's Museum has set off serial portrayal of social, political, economic and cultural history of Bangladesh since prehistoric era to the inception of independent Bangladesh by means of three-dimensional artwork.

There is a most modern auditorium occupied by 650 seats has been set up in the head office of Bangladesh Shishu Academy. Furthermore, an open podium named by Motiur Mancha in commemoration to the memory of Juvenile Martyred Motiur during the people's uprising during 1969. Various children's associations perform there paying a nominal fee.

Bangladesh Shishu Academy deals with various programmes aiming to make conscious the people about the UN Charter on Children's right comprising of 54 sections. The academy implements these programmes being organised various discussion sessions, publication of souvenir and posters. In addition

Under the supervision of the Bangladesh Shishu Academy, three projects have been dealt with, which include 'Preliminary education for the exposure of the children' and 'Sisimpur out-rich Project'; an animated segments on issues of Bangladesh. [Razina Akhter]