Bethune College the first college to play a historic role in the cause of women's education in Bengal. It started as the Hindu Female School and blossomed into the Bethune School on 7 May 1849. Its founding father, John Elliot Drinkwater Bethune (1801-1851), himself a graduate from Trinity College, Cambridge and the Fourth Wrangler, had arrived in India in April 1848 as the Law Member of the Governor General's Council. He also held the post of President of the Council of Education. In his pioneering zeal to promote women's education, he received the support of some enlightened Indians like Ram Gopal Ghosh, Raja Dakshina Ranjan Mukherjee and Pandit Madan Mohan Tarkalankar. 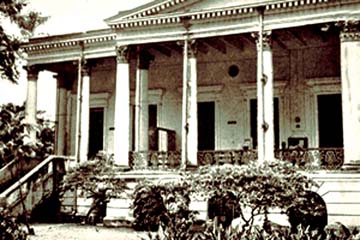 The Bethune School started functioning with twenty-one girls on its roll on a piece of land donated by Raja Dakshina Ranjan Mukherjee at Mirzapur in Calcutta. Bethune died on 12 August 1851 and lord dalhousie, the then governor general of India, carried his work forward. The school now shifted to a new building on the West of Cornwallis Square, where its foundation stone was laid on 6 November 1850. The progress of this school received a fillip with its amalgamation with the Banga Mahila Vidyalaya, another leading women's school of Calcutta. The reorganised Bethune School sent up for the first time Miss Kadambini Bose to sit for the Entrance Examination of 1879. Miss Bose was successful, and was placed in the Second division. Kadambini Bose's intense desire to prosecute higher studies prompted the Government to explore the alternative of setting up a Women's College vis-a-vis the option of continuing graduate classes at Bethune School, the only Government institution for women in Calcutta.

The college started functioning in 1879 with one enrolment, Kadambini Bose. In 1883 she found a fellow student in Chandramukhi Basu, a native Christian girl from Dehradun. In 1883 both Kadambini and Chandramukhi qualified in the degree examinations of the university of calcutta. By 1887-88 the College Department of Bethune School underwent a radical change, as its students roll now comprised eleven girls, one of them being in the MA class. In February 1888, Bethune College received affiliation to the University of Calcutta up to the BA standard; Chandramukhi Basu who had already completed her MA with Honours in English, became its first Principal.

In the first fifty glorious years of the college, the number of students rose steadily and the college had its share of excellence in the University examinations and extra-curricular activities. By 1914-15, the studentship rose to 72, the highest ever admitted since the commencement of the college. By the turn of the next decade (1925-26) it had reached 151. Within the next ten years this number rose to 260. Political disturbances triggered by the civil disobedience movement, the August Movement and more importantly, the Great War, had temporarily dampened the spirit of this College. But by 1949 its rolls had once again started swelling. Coupled with the rise in the number of students was a steady augmentation in the subjects taught at the College.

Between 1890 and 1931, Bethune College supplied twenty-two recipients of the Padmavati Gold Medal awarded by the University to the female candidate topping the BA examination. Sm Sarala Ghosal, later Sarala Devi Chaudhurani, was the first to receive this medal. In 1938 Quazi Akhtar Banu, (later Akhtar Imam) topped the BA examinations in Philosophy and won the Gangamani Debi Gold Medal. In 1940, a comparative analysis of the results of the different colleges in Calcutta put Bethune College second only to presidency college, which enjoyed a unique place of distinction. Several Muslim students of Bethune College, starting with Faziltunnessa in 1925 achieved remarkable success. Faziltunnessa Zoha later on became the Head of the Department of Mathematics and also the Vice-Principal of the College. Names like Akhtar Imam, (later Professor of Philosophy and Provost of Rokeya Hall, Dhaka University) and Samsunahar Mahmud (later the Inspectress of Schools) shone out among the alumnae of this College.

Among the alumnae of this College were some of the outstanding women who stood out in their respective fields and pioneered the cause of education and liberation of women. To mention a few, Sm Kamini Roy, Sm Sarala Devi Chaudhurani, Sm Lila Roy, and Dr Dipti Tripathi - all contributed to the repertory of Bengali literature and culture. Dr Asima Chatterjee registered a breakthrough in scientific attainments while Sm Bina Bhowmik, Sm pritilata waddedar and Sm Kalpana Joshi contributed their mite to the cause of India's struggle for independence. [Rachana Chakraborty]