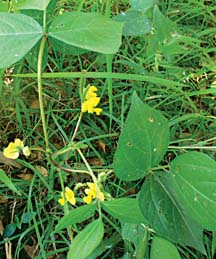 Black Gram (mashhkalai) a leguminous plant species, Vigna mungo. This pulse crop has been cultivated for a long time in the Indian subcontinent and is not known in a wild state. A drought resistant crop, it is grown both as a summer and winter crop; often in rotation with rice but sometimes in mixed cultivation. It is usually planted on a rough seedbed as too much tilt encourages vegetative growth at the expense of the seed. The period to maturity is 80-120 days and yields of 714 kg/ha dried seeds are obtained. Mashkalai is cultivated in about 161,000 acres of land in Bangladesh and total annual production is about 50,000 m tons.

The plant is an erect, sub-erect or trailing annual herb which grows up to 80 cm in height. Flowers are pale yellow. Pods are erect or sub-erect, light or dark brown at maturity and cylindrical. Seeds are mostly black, but green forms also occur.

Mashkalai is one of the highly prized pulses in Bangladesh. It is boiled and eaten whole or after splitting into dal. The dried seeds contain approximately 9.7% water, 23.4% protein, 1% fat, 57.3% carbohydrate, 3.8% fibre and 4.8% ash. It is also used as a green manure and cover crop or fodder crop, and as a short-lived forage. Mashkalai is attacked by downey mildew, rust, leaf spot, and the hairy caterpillar. [Nishit Kumar Paul]