Administration Boalkhali Thana was formed on 9 August 1910 and it was turned into an' upazila on 3 July 1983. 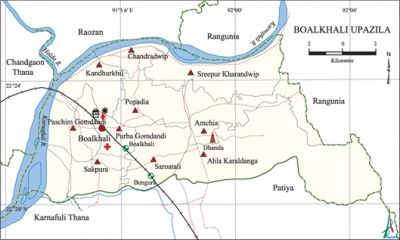 History of the War of Liberation Many people were killed or wounded in direct encounters between the freedom fighters and the Pak army at different places of the upazila like Kalurghat, Fakirni Dighir Par and Kanungo Para. The Pak army conducted mass killing at the premises of the Durgabari of Kandhurkhil on 13 October. They also conducted torture and plundering and set many houses on fire.