Botanical Garden a place protected from public interference, in which plant species that are rare, exotic or useful are grown for scientific or educational purposes. Aristotle in 340 BC established the first botanical garden on record. The oldest public botanical garden was established in Italy in 1543 and with the passage of time it became a tradition in most European cities to have a botanical garden. One of the world's famous botanical gardens was established at Kew in a suburb of London in 1759, but was officially opened in 1841. Its founder director was Jackson Hooker (1785-1865). Later his illustrious son, the famous botanist Dalton Hooker (1817-1911), gave the garden a fuller character. The Kew Botanical Garden had been and is still providing pivotal help to plant conservation and research and in establishing botanical gardens in different parts of the world. The Kew Garden has provided valuable help in the establishment of the bangladesh national herbarium located at Mirpur in Dhaka city. In Calcutta, India, the Royal Botanical Garden was established at Shibpur in 1787. Colonel Robert Kid of the East India Company was its pioneer. In the beginning, cultivation of teak trees was the main goal, but even before Kid died in 1793 this garden had 300 plant species. Subsequently, celebrities such as william roxburgh, Nathaniel Wallich, George King, David Prain and others turned the garden into one of subcontinent's most famous botanical gardens. 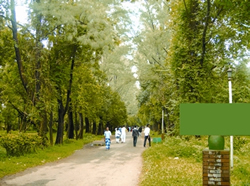 The oldest botanical garden in the region that comprises present-day Bangladesh was established on an area of approximately 15 acres in a small town called Jamalpur, by Iswar Chandra Gupta and called ‘chaitanya nursery’. But the garden disappeared due to lack of care and funds soon after the death of its founder in 1930. One of the oldest botanical gardens in this part of the Indian subcontinent was established in the city of Dhaka in 1909 at the initiative of the then landlord of the Estate of Baldah, and the garden came to be known as the baldah garden. Although relatively small in area, the Baldah Garden is famous for its floristic splendour and a large collection of rare and exotic plant species acquired from over 50 different countries during its long lifetime of nearly a century.

A much later addition and a garden much larger in area is the National Botanical Garden, which was established in 1961 covering an area of about 84 ha of land located at Mirpur, about 10 km from Dhaka city. The garden houses nearly 50,000 species of trees, herbs, and shrubs including a large collection of aquatic plants. Many exotic plants have been introduced in the garden and acclimatised, and are routinely propagated under the local climatic conditions. Rare and exotic plant species found in the garden include Anthurium (Anthurium crystallinum), Camphor (Cinamomum camphora), Rabbit Fern (Davallia canariensis), Dambia (Dombeya spectabilis), white 'Rangan' (Ixora superba), little Mussanda (Mussaenda luteola), Amazon Lily (Victoria amazonica), 'Harhjora' (Vitis quadrangularis), African Tulip (Spathodea campanulata), Sambucuas (Sambucus nigra), white 'Chandan' (Santalum album), etc.

The garden is well-planned and provides learning and recreational facilities, located adjacent to the National Zoo. The garden is divided into 57 sections, and is managed by the government through the Department of Forestry, Ministry of Environment and Forests. A satellite unit of the National Botanical Garden is the Baldah Garden. There are in addition smaller botanical gardens in the city, one of which is the Botanical Garden of the university of dhaka, located on the curzon hall premises in the heart of the city. It primarily serves the purpose of teaching botany to the university students and enabling scientific studies with plants by the students and faculty of the university. All the public universities, outside Dhaka, also have botanical gardens for scientific studies. Recently the government of Bangladesh has decided to establish a new botanical garden in the Chandranath hills in Chittagong district. [Zia Uddin Ahmed]