Buddha Purnima the main religious festival of the Buddhist community, observed on Baishakhi purnima, the day of the full moon in Baishakh (mid-April to mid-May). Three important events in the life of Buddha are believed to have occurred on this day: his birth in around 623 BC, his gaining enlightenment (Nirvana) in around 588 BC, and his death (Mahaparinirvana) in' around 543 BC. According to Buddhist tradition, Buddha, after his previous incarnation as Santos Kumar, was living in paradise. 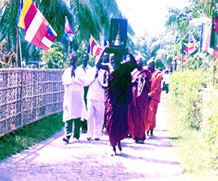 He was asked by the gods to take rebirth as a human being for the salvation of the world and to show human beings as well as the gods the road to bliss. He considered the gods' request and, on the day of the full moon in Asadh (mid-June-mid-July), he entered into his mother's womb in a dream.

Buddha was born on the following auspicious Baishakhi purnima. As Siddhartha, he renounced his family at the age of 29 and travelled and meditated in search of truth. After meditating for six years at Urubela (Buddhagaya) in Gaya, he attained Buddhatva or enlightenment. According to Buddhist tradition, the day of his enlightenment was also a full moon day in Baishhakh, or Baisakhi purnima. After attaining Buddhatva, he travelled throughout India for 45 years propagating the principles of his religion. He breathed his last at the age of 80 in the shal forest on the banks of the Hiranyavati. That day, as the  Buddhists believe, was also a Baishakhi purnima.

On Buddha Purnima, Buddhists arrange panchashil, astashil, sutrapath, sutrashravan, collective prayer and various other religious ceremonies. They recite stories of the Buddha and his disciples. Apart from religious rites, social and cultural events are also organised. Many Buddhist viharas organise three-day celebrations. The day is observed as a public holiday and there are special programmes on Radio and TV. Newspapers bring out special issues on the occasion. Various viharas and organisations publish souvenirs and magazines on the occasion. Fairs are also held on the day at different villages and viharas; one such is the Bodhidrum mela at Baidyapada in chittagong. [Sukomal Barua]