Calcutta Port one of the oldest modern ports in South Asia. Managed by the Calcutta Port Trust since October 1870, after the failure of an earlier experiment with a river trust, the history of the port goes back much farther in time than the formal establishment of the Port Trust. The port area had been, before the English east india company made it into a centre of maritime trade, a small riverine mart settled by weavers and artisans. In Calcutta's transformation from small weavers' settlement into a premier centre of Eastern India's transoceanic trade, the port on the river Hughli was the catalytic agent. As the gateway to the large eastern Indian hinterland stretching upto the foothills of Assam in the northeast and the Gangetic North Indian plain to the west, it was the creation of the British. Its increasing importance since the middle of the eighteenth century was inevitably linked with the early consolidation of British power in Bengal. 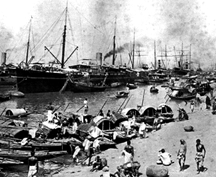 The pre-eminence of Calcutta Port since the mid-eighteenth century was inconceivable without the decline of the Mughal port of Hugli or even Surat in the west coast. Calcutta’s rise was accompanied by a major disruption in the existing structure of intra-Asian trade in the Indian Ocean and the rise of the English power in eastern India. By the time the English Company became the rulers of Bengal, this structure of Indian Ocean trade had already collapsed. The possibility of its revival was ruled out by a re-orientation of India’s foreign trade towards China with its final destination in Europe.

In the end, trade with Britain began to dominate India's international economy, which came to be centred on ports like Calcutta or Bombay.

There is, of course, a navigational aspect to Calcutta's development as a port town, manifested as it had been in a downstream movement of trading settlements along the Bhagirathi-Hughli channel of the Ganga since the sixteenth century. Over time, the Hughli channel, which had once been the main course of the great river, became unsuitable for bigger vessels due to silting caused by the larger intake of water by the distributaries flowing in the easterly direction. For large cargo vessels navigation in the Hughli itself had its difficulties due to frequent bends and turns; sailing upstream was made all the more difficult by the narrowing of the channel.

By the time Portuguese ships arrived in Bengal, in the early sixteenth century, establishing the region's first contact with the Europeans, the change in the Ganga river system had started taking its toll on the trading settlements in the upper reaches of the Hughli channel. satgaon, which was a flourishing riverine port on the confluence of theriver Saraswati and the Bhagirathi, increasingly became inaccessible for sea-going cargo ships. At the end of the sixteenth century the large Portuguese ships stopped at Betor, in the vicinity of later day Calcutta, to be fed with merchandise carried by smaller vessels from Satgaon. In 1570, the portuguese shifted their factory from Satgaon to Hughli, a few miles down-stream. Before long, Hughli replaced Satgaon as the principal commercial outlet to the sea in this region.

Hughli retained its importance throughout the seventeenth century. A few decades after the expulsion of the Portuguese by the provincial Mughal authorities from this settlement in 1632, the dutch and the English set up their factories. More importantly, trade at Hughli encouraged the growth of a larger network of smaller trading marts and settlements further down-stream, all along the waterfront as far down as Sutanuti and Govindapur, which subsequently formed the nucleus of the English Company's port town of Calcutta. The migration of the Seths and Basaks from Satgaon to Sutanuti set the backdrop to the rise of Calcutta. The English before they settled in Calcutta knew that 'of all the places to which ocean-going vessels could proceed, Calcutta Reach had deep water along the eastern bank from Govindapur to Garden Reach' capable of accommodating a large number of sea-going vessels.

Calcutta's development as a port town in the eighteenth century was, to a large extent, facilitated by a re-orientation that the English brought about in the overall direction of India's maritime trade from the West Asian trading zone to the east against the backdrop of the political crisis in Mughal India, Safavid Iran and Ottoman Turkey. With the progress of the eighteenth century, this entire process became linked with the increasing importance of Europe as the final destination of this trade. At the same time there was a remarkable development of Calcutta based English private shipping that turned the new port town into a bustling trading centre.

During the high noon of the British Empire in the later half of the nineteenth century, rapid expansion of Calcutta's export-import trade, which was almost totally tied with Britain, took place within the broader framework of an altered commodity composition of this trade and consistently produced an export surplus that was much larger in value than that of either Bombay or Madras. Calcutta's large merchandise export, primarily in agricultural and semi-finished products, produced a favorable balance of trade often offset by official and private remittances to Britain on account of savings, business profits of British owned companies and service charges for British banking and insurance houses, apart from the straight forward political tributes extracted as 'home charges'.

It is a truism that this elaborate mechanism of export led exploitation made Calcutta Port exceedingly important to the British since the inception of colonial rule. Yet the development of adequate infra-structural facilities in the port had to wait for establishment of the Calcutta Port Commissioners in 1870. That of course coincided with a new thrust in India's international trade emanating from the completion of the basic railway network. Until then, despite a substantial expansion of Calcutta's oceanic trade, the facilities in the port remained somewhat primitive in the absence of properly constructed jetties and docks.

In the early colonial period, the main objective of the port administration, which was entrusted with the Marine Establishment of the Company under a Master Attendant, was to provide pilot services to the sea-going vessels. The Master Attendant also conducted regular surveys of the river to report on its navigability. From the middle of the eighteenth century, the absence of docking facilities became a major concern, as ships had to be taken to Bombay for repair. A dock was first built in 1790 near Bankashall Ghat. Already in 1781, the Company had apportioned a plot of land to Colonel Watson for the construction of wet docks at the southern end of the port. Watson had set up a marine yard at Kidderpur and in 1781 commenced work on the construction of the wet dock before a legal dispute with the family of Gokul Ghosal compelled him to abandon the project. Watson subsequently devoted his attention to the shipyard in which a few ships were built before his retirement from business. After Watson, there were several attempts to build a shipbuilding industry in Calcutta, but they stood no comparison with the shipbuilding activity in Bombay under Parsi enterprise. In the early part of the nineteenth century, however, India built shipping had to leave the field to English shipping interests.

In the 1820s, several plans were discussed for the construction of wet docks in Calcutta and Diamond Harbour; but nothing came of these proposals. The devastating cyclone of 1842, which damaged the ships anchored in Calcutta Port, once again revived the discussion. The issue of modernising the port was side tracked by an abortive attempt to establish a new port on the Matla in the 1860s. The resultant Port Canning scheme was intended by its promoters to provide an alternative outlet for trade in view of certain prediction about an early death of the Calcutta port due to the silting of the river - a problem that had ruined Satgaon on the same Hughli channel three hundred years ago. But Calcutta by then had become too important for the British to be dispensed with so easily. Confirming the pessimism of the opponents of the Port Canning scheme the satellite port on the Matla River failed to divert traffic from the Calcutta port and the government proceeded to set up the Port Trust to ensure a more efficient management of the system that had given the British empire in India its solid foundation in commerce.

When the Port Trust began its work in October 1870, after the failure of an earlier experiment with a river trust under the administrative control of Calcutta Corporation, there were only four jetties in operation and a wharf, which accommodated 52 vessels with a total tonnage of about 48,000. During 1871-72, the number of jetties rose to six, which accommodated 143 vessels with a net tonnage of about 222,000 tons. The total length of wharves increased significantly to handle primarily goods like grains, seeds and raw and semi-finished jute products. The Budge Budge petroleum wharf was commissioned in 1886. The fast growing export of tea, from Assam and northern Bengal, during the 1870s led to the building of a tea warehouse on the Strand Bank lands.

One important development during the last quarter of the nineteenth century was the completion of the Kidderpore Docks in 1892 in response to the persistent demand for this facility from Calcutta's mercantile community. The last twenty years before the First World War experienced a phenomenal growth in export import trade through the Port of Calcutta dominated as it was by bulk products along with a significant expansion of coastal trade in commodities like coal. In the wake of the partition of bengal, 1905, the government of Eastern Bengal and Assam visualised the development of chittagong port as a competitor, but without any significant results.

The subsequent phase in the modem transformation of the Calcutta Port between the two World Wars, though cut short by the Great depression, was accompanied by the growth of modem industries in the region. Yet before the depression set in, King George's Dock at Garden Reach started functioning from 1929. The Second World War, accounting for the relative stagnation in the development of the Calcutta Port, interrupted a brief period of commercial recovery during the mid-nineteen thirties. Such trends were reinforced by economic changes after India's independence. Just as Calcutta's eminence as a port was a function of British imperialism, the end of British rule made for its gradual decline. [Bhaskar Chakrabarti]