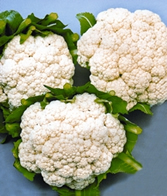 Cauliflower (fulkopi) a cultivated winter crop, Brassica oleracea var.botrytis, of the family Cruciferae, whose inflorescence forms a compact, fleshy head. Cauliflower is used as fresh or cooked vegetable; sometimes as an ingredient of pickles; it is rich in vitamin A, C and calcium. The acreage of cauliflower cultivation in Bangladesh is about 9,400 ha and the annual production amounts to about 73,000 m tons. Thirty days old seedlings are very suitable for transplanting in October-November, yield ranges 25-30 m tons/ha.