Chadak Puja a Hindu religious ceremony, observed on the last day of the Bangla month of Chaitra. It is also known as Nil Puja. It is a variation of Gambhira Puja or Shiver gajan celebrated in west bengal. Fairs lasting several days are held in the villages in connection with this puja. 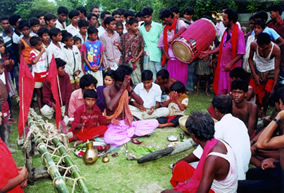 A phallic symbol, known as Budoshiva or old shiva and representing the reproductive powers of Lord Shiva, is put in a container of water. The puja is conducted by a Brahmin acharya or priest. The special rites of Chadak Puja include worshipping the crocodile, walking barefoot on burning charcoal, jumping on knives, piercing the body with nails, and swirling from a high pole. At the root of Chadak Puja is a belief in spirits and the cult of rebirth. Its rites suggest ancient human sacrifice.

Physical torture is an important part of the religious rites. A ‘chadak’ pole  is erected on the occasion. An ascetic devotee is hung from this wheel with a hook. The wheel then spins around with him at high speed. Small nails, at times red hot ones, pierce all parts of his body including his tongue. The British Government outlawed this horrible practice in 1865 but it is still prevalent in rural areas. 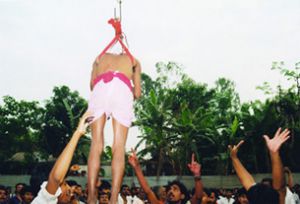 Ascetic hanging from a hook

Chadak Puja is not mentioned in the classical texts. Lingapurana, Vrihaddharmapurana and Brahmavaivartapurana refer to dancing and singing on the occasion of Shiva Puja in Chaitra but do not mention Chadak Puja. Govindananda's Varsakriyakaumudi and raghunandan's Tithitattva of the 15th/16th centuries, which record various annual religious ceremonies, do not mention this puja. [Sambaru Chandra Mohanta]