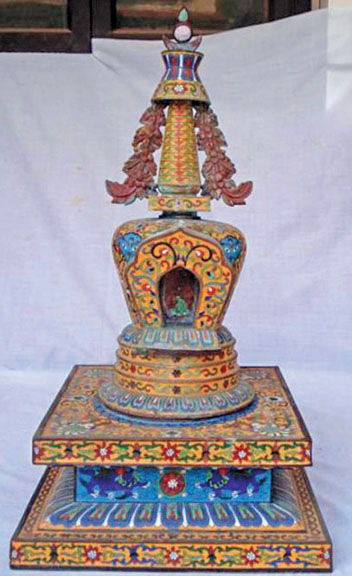 Chaitya is a Buddhist shrine including a stupa. It is derived from the Sanskrit word chita. The mound of ashes formed by the cremation of a dead body is called a chita. In general a chita is a place where the dead body used to burn. Eventually it came to mean the earth mound heaped over the ashes or relics of a saint, and thus a chaitya (or chita) became a place of worship. Chaitya and stupa both are sacred places for the Buddhist community. A chaitya is considered as the earliest form of a stupa. In modern text on Indian architecture, the term chaitya-griha (chaitya hall) is often used to denote assembly or prayer hall that houses a stupa. In a sense it is similar to a house or griha. According to the pattern of architectural devise it shows similarities to Roman design-concepts of column and arch. In the early age the monks used to built chaitya griha (hall) by cutting a single massive rock. These were known as cave temples. About 1200 such cave temples were built throughout India. Most important are at Ajanta and Ellora. Stupas were usually set into these chaitya grihas.

The earliest rock-cut chaityas date back to c200 BC. The chaitya halls embodied the same metaphysical symbolism that was attached to the stupa form. As Buddhists believed that the chaitya hall itself was a universe in a microcosm, with the entrance arch as a doorway to the world. Such halls were usually constructed beside the rivers or canals. The largest brick chaitya hall was excavated at Visakapatnam in the 3rd century B.C. Ruins of a large number of structural Buddhists chaitya grihas are found in the eastern districts of Andhra Pradesh. Some of the most beautiful rock-cut caves are those at Ajanta, Ellora, Bhaja, Bagh. The earliest brick and wooden cut chaitya halls of Ajanta in Maharashtra state belong to the first phase were excavated between 5th AD and 9th century AD. Similar chaityas were constructed during Asokan time. Some of the chaityas showed that, wood had been used in the roofing and entrance arches. These types of chaityas were constructed during the second phase of Buddhist architecture by the Mahayana creed. The chaityas at Bhaja caves were constructed in the 1st century B.C. It consisted of an apsidal hall with stupa. The walls were polished according to Mauryan style.

Chaityas were probably constructed to hold large number of devotees and to provide shelter for them. There are no such significant chaityas in Bangladesh. There is an symbolic chaitya preserved at the National Museum, Dhaka. [Nasrin Akhter]