Chatmohar Mosque situated in the heart of Chatmohar Bazar in Pabna district, was once in utter ruins. The mosque was thoroughly restored and repaired in the 1980s by the Department of Archaeology, Bangladesh, and is now a protected monument. A Persian inscription in beautiful Tughra, now preserved in the Rajshahi varendra research museum, records its construction in 1582 AD by Khan Muhammad bin Tuwi Khan Qaqshal. 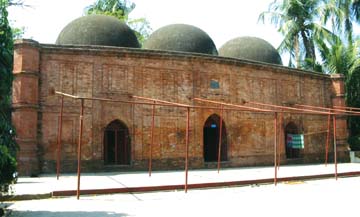 Enclosed by a low outer wall the mosque occupies the western half of a slightly raised platform. Built entirely of brick, it is oblong in plan, measuring 18.14m by 8.23m on the outside. The walls are 1.98m thick. The four exterior angles of the building are strengthened by octagonal towers, which rise up to the roof level. Access is provided through two-centered pointed archways - three in the eastern facade and one each on the north and south sides. Of the three eastern archways the central one is bigger. The qibla wall is internally recessed with three semi-circular mihrabs, of which the central one is bigger and shows a rectangular projection towards the back.

The three equal square bays in the interior of the mosque, formed by two two-centered pointed transverse arches, are covered with three hemispherical domes of equal dimension. The domes are carried on transverse arches and blocked-arches over the mihrabs and doorways. The phase of transition is achieved by means of the Bengali pendentives. The cornices of the building are gently curved in the Sultanate fashion.

In the eastern facade each of the three archways is set within a slightly recessed rectangle, and the spandrels of the arches are still marked with rosettes. A pair of rectangular panels, one above the other flanks each of the archways. These panels, though now bare, must have had decorations originally.

A moulded horizontal band runs through the middle of the walls giving the building a two-storied appearance from the outside. All the mihrabs, contained within rectangular frames, originally had terracotta ornamentation, traces of which still survive. Varieties of motifs such as rosettes, geometric patterns and floral scrolls were used.

This mosque in Pabna and the kherua mosque at Sherpur, Bogra, both built in 1582 AD and of the same plan, are the two earliest existing monuments of Mughal Bengal. Though produced in the Mughal period, the present example strongly bears the stamp of the regional art tradition of the sultanate period, such as the terracotta ornamentation, the bent cornices, the two-centred pointed arches, semi-circular mihrab apertures, domes without drums and finials, the corner towers rising up to roof level and the Bengali pendentives. In spite of all these distinguishing features of Sultanate architecture the building marks a clear departure at least in its internal arrangement and disposition. It set the pattern of a three-domed mosque style in Bengal, which henceforth, with elaboration and additions, long continued in the land.

This particular mosque style must have been a north Indian derivation; its earliest examples are to be found in the Lodi and Suri periods. The style evolved throughout the Mughal period. The north Indian Mughal three-domed prayer chamber without the addition of Sahn with surrounding riwaqs - a rectangular covered type - was at times regarded as a perfect mosque plan by itself, as exemplified in the Sunheri mosque at Delhi and the mosque beside the Taj Mahal (1634) at Agra. This particular kind of Indian mosque may be suggested to have been an elaboration of the Persian Iwan-i-Karkha type at Muhammediya or the musalla at Mashhad. [MA Bari]