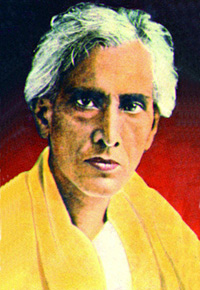 Chattopadhyay, Sharat Chandra (1876-1938) novelist, was born in Debanandapur under Hughli district on 15 September 1876. His early years were spent at his maternal uncle's home in Bhagalpur. In 1894, Sharat Chandra passed the Entrance Examination from TN Jubilee Collegiate School and was admitted to the FA class. However, he was unable to continue because of poverty.

Sharat Chandra started his career as an assistant to the Settlement Officer of Baneli Estate. He subsequently worked as a translator at the Calcutta High Court and as a clerk in the Accounts Department of Burma Railway. Sharat Chandra was also associated with the Bengal Congress. In 1921 he took part in the non-cooperation movement led by Congress and was elected president of Howrah District Congress.

The main themes of Sharat Chandra's novels relate to rural life and society. His writings also manifest a deep affection and respect for Bengali women. He was highly vocal against social discrimination, superstitions and immoral practices in the name of religion. The immense popularity and reputation of his works may be attributed to his outstanding narrative ability and his lucid language. A number of successful movies, in different Indian languages, have been based on his novels: Devdas, Srikanta, Ramer Sumati, Dena-Paona, Birajbau etc.

In recognition of his contribution to literature, Sharat Chandra was awarded the 'Kuntalin Puraskar' (1903), 'Jagattarini Svarna Padak' (1923), membership of vangiya sahitya parishad (1934), and an honorary DLitt by the university of dhaka (1936). He died at Park Nursing Home in Kolkata on 16 January 1938. [Syed Azizul Huq]