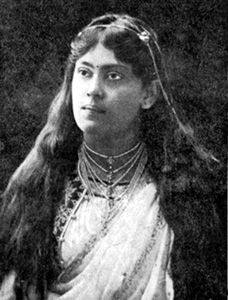 Chaudhurani, Saraladevi (1872-1945) writer, social worker and nationalist, was born on 9 September 1872 at Jorasanko in Kolkata. Her father, Janakinath Ghosal, was a founder member of the indian national congress and her mother was swarna kumari devi. At bethune COLLEGE, kamini roy and Lady Abala Bose were among her classmates. Saraladevi stood first in the Entrance examination (1886), and passed BA with honours in English (1890). She was proficient in French, sanskrit and persian. She was married in 1905 to Rambhuj Dutta Chaudhuri, lawyer, leader of the Punjab Arya Samaj and editor of the journal Hindustan (Lahore). She taught at the Maharani Girls' School in Mysore. She was involved in a variety of ways with the nationalist movement of the times. She sang Vande mataram at a conference of the indian national congress, altering the 'seven crores' in the text to 'thirty crores'. She helped Jatindranath Bandyopadhyay to form a revolutionary group, and she took active part in the swadeshi movement, founding Laksmir Bhandar (1904), which propagated the use of hand-woven textiles. She took the initiative to spread education among Punjabi women in purda. The Bharat-Stri-Mahamandal was founded through her efforts.

In Kolkata, Saraladevi founded the Bharat-Stri-Shiksa-Sadan and introduced games with swords and batons among women. Her involvement in nationalist politics brought her in contact with Lala Lajpat Ray, Gopal Krishna Gokhle, Bal Gangadhar Tilak, and Gandhi. Though she had founded the Theosophical Society, in later years she turned religious, becoming a disciple of Guru Bijoy Krishna Dev Sharma.

Apart from writing, Saraladevi also edited a number of journals. When her husband was in jail, she edited the Hindustan and launched its English edition. For a long time she helped edit the bharati. She wrote hundred number of nationalistic song compiled as a Shatagan which published in 1900. Among her important publications are Nababarser Svapna, Jibaner Jharapata, Babgalir Pitrdhan (1903), Bharat Stri Mahamandal (1911). Saraladevi died on 18 August 1945. [Badiuzzaman]