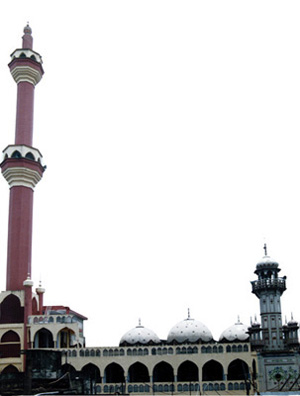 Chawk Mosque, Dhaka Located in the Chawkbazar area of old dhaka, the mosque has been so much altered and extended that today it is hardly possible to have an idea of its original form and design. The northern wall of the mosque proper has been removed.

Multi-storied extensions have been made on the north and east sides. The original three-domed roof has been demolished and a new one of similar nature (making the central dome much bigger) built over the upper storey. The thickness of the walls has been reduced. The mihrabs and the doorways have been widened, and the single archway in the south is now closed. On the basis of the surviving features, combined with the accounts given by some previous authors, a short description of the original mosque and the vaulted plinth below can be attempted.

The western half of the 3.05m high vaulted platform (28.65m from north to south and 24.38m from east to west) is occupied by the original three-domed mosque proper. It measures, inclusive of the four octagonal towers on the exterior angles, 16.15m by 7.92m. There are three four-centred archways in the east, all opening out under half-domed vaults. The central archway is set in a projected fronton, which was originally bounded by the usual ornamental turrets.The half-domed vault of the central archway still contains beautiful muqarnas works in stucco. Corresponding to these three eastern entrances there are three mihrabs inside the west wall, all now remodelled. The central mihrab still has a semi-octagonal aperture, while its flanking counterparts are rectangular in design. The mihrabs are now all studded with lustrous pieces of enamel. The rectangular frames enclosing the mihrabs are now topped by rows of painted crestings. The floor of the mosque proper is now laid with marble.

The interior of the mosque was divided into three bays - the central one square and the side ones rectangular. All these bays were covered with domes, the central one being bigger than its flanking counterparts. This can be deduced from the newly built three-domed prayer chamber exactly above the original one, where the central dome has been kept larger than the side ones.

The vaulted rooms all round underneath the platform are either square or rectangular in shape. Many of them are now let out to shopkeepers and others are still being used as accommodation. The underceilings of these rooms are flat on the top and barrel-shaped at the sides.

This is perhaps the earliest dated mosque in Bengal that was built on a high vaulted platform. The vaulted rooms underneath the platform must have been originally devised for providing residential accommodation for students and teachers, as in other mosques in Dhaka, eg kartalab khan’s mosque (1701-04) and Khan Muhammad Mirdha's Mosque (1116 AH/ 1704-05 AD). Because of this speciality the present example, like others of its kind, may be said to have been originally built as a 'Residential Madrasa Mosque'. A Persian inscription over the central doorway of the mosque proper records its construction by Subahdar shaista khan in 1086 AH (1675-1676 AD). [MA Bari]