Chawk Mosque, Murshidabad built in AH 1181 (1767 AD) is one of the largest mosques of the district and is situated in the centre of murshidabad town, West Bengal, to the south-east of the Hazarduari Palace, and abutting the walls of the Kellah Nizamat. From epigraphic evidence it is known that munni begum (wife of Mir Jafar) built the mosque. It is therefore also known as the Begum's mosque. Construction work of the mosque was carried out under the supervision of Shaikh Khalilullah on the site of the Chihil Setun or the forty pillared audience hall of murshid quli khan which no longer exists

A loose inscription tablet has been found from the Chawk Mosque complex that contains a religious text in Arabic written in the Naskh script. The date on the epigraph is AH 1206 (1791-92 AD), but there is no name of any dynasty or ruler. 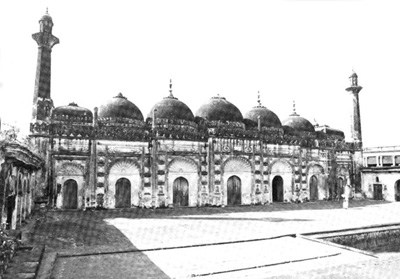 The mosque stands within a walled courtyard which can be entered through an elaborately stucco decorated portal on the east. The enclosure wall is ornamented by bold octagonal pavilion in the angles. The edifice, measuring 38.10m in length, 6.10m in breadth, and 13.72m in height, presents a majestic appearance. Beyond the portal is a spacious courtyard with chambers for religious instruction.

The mosque is roofed over by seven hemispherical domes, the central one being the largest. The flanking six domes gradually reduce in height in gentle slopes on either side. The two end members are not hemispherical in shape; rather, they are squat and rectangular, somewhat resembling a Tazia. Two tall slender minarets flanking the mosque accentuate the verticality of the monument with pillared kiosks that are placed atop. Three among the five domes are crowned with lotus and kalasa (jar) finial. All the domes rest on circular drums and are decorated with creeping petals.

The mosque can be entered through seven single pointed arched openings, which are surmounted by cusped arches with stucco decoration within the recessed tympanum. Each fa'ade is embellished with floral motifs, arabesques, and cusped arch-shaped niches in stucco relief. The outlines of the arches and the niches are covered with bands of floral designs or arabesques. Out of the seven bays on the east of the mosque three central bays project from the flanking ones carried up to the parapet. At either corner of the projections, slender engaged columns with banded decoration relieve the otherwise monotonous appearance of the facade. The wall surface above the cusped arches of all seven bays contain rectangular friezes with stucco decoration, barring the central one, which leaves a vacant space evidently meant for fixing the inscription tablet, and no longer in situ. The parapet of the mosque is crenellated with a series of merlons as can be seen in Mughal mosques.

The rectangular prayer hall has two subsidiary doorways, one each on the north and the south side. The interior is decorated with ornate stucco relief, as is the exterior. The domes are supported on cusped lateral arches and squinches, which bear repetitious leaf patterns in stucco. The mihrabs are similarly embellished. The execution of ornate stucco decoration in Bengali Mughal-style architecture can be seen in the interior of khwaja shahbaz’s mosque and tomb (1679 AD) in Dhaka, as well as in Khwaja Anwar Shahid's Tomb and Mosque in Burdwan. [Sutapa Sinha]